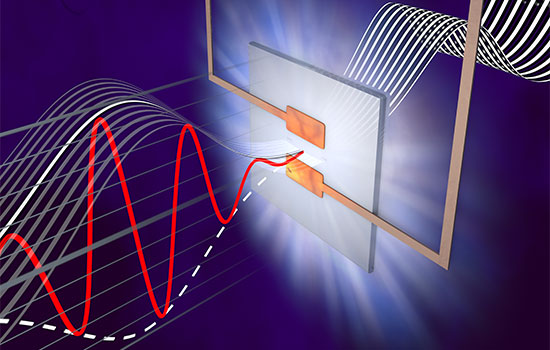 Modern electronics and digital technologies such as smartphones and computers rely on the control of electric current in devices composed of semiconductors.

The performance of such technologies could soon dramatically increase after the results of an international study by scientists from Monash University and the Max Planck Institute of Quantum Optics (MPQ), in Germany.

The work, published in Optica, found that electric current in a semiconductor can be turned on and off at unprecedented speeds by using engineered light as a means of control.

These findings pave the way for the design of semiconductor electronic devices that are controlled optically and that can operate at frequencies much larger than those demonstrated until now. Modern electronic circuits are made of transistors. These devices are found everywhere, from computers to smartphones and amplifiers.

A transistor is an on/off switch in which the key material is a semiconductor connected to metal electrodes.

“The time it takes the transistor to switch from on and off and vice versa, determines the rate at which the device can perform operations," said Monash researcher and ARC Future Fellow, Dr Agustin Schiffrin, the lead investigator of the study.

“With a smaller switching time, the device performs much faster and can do a lot more. We found that by using ultrashort bursts of light – which are the shortest and fastest tools available to researchers – an electric current can be turned on and off in a semiconductor at rates thousands of times higher than those achieved in current state-of-the-art devices.”

This work showcases the fastest electric currents ever measured in a semiconductor, opening the door to the design of optically controlled semiconductor-based electronics performing at ‘petahertz’ frequencies.

The research paper is available here.