The Contagion Effect: how bribery and corruption spreads 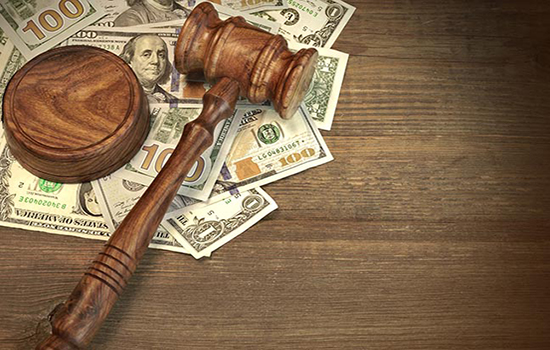 Bribery is a stubborn scourge in many countries that undermines economies and promulgates inequality. It persists despite the usual response of applying tough sanctions against both the officials who accept bribes and those who offer them. Is bribery “contagious”?

New research from Monash Business School has demonstrated for the first time the existence of a “contagion effect” in relation to corruption, where the prevalence of bribery among officials in a country determines whether a citizen offers a bribe, rather than the risk of sanctions.

“Just knowing bribes are common in a country will induce more people to offer bribes even though the risks remain the same,” says Monash Business School Professor Klaus Abbink, who carried out the research with colleague Professor Lata Gangadharan.

Currently in most countries, both the bribe taker and giver are punished. But even when countries with corruption problems adopt tougher penalties, bribery continues to flourish.

Both economists wanted to test the idea that corruption could be contagious in an environment where bribe-giving and receiving had become normalised. However, they faced a problem.

“Bribery is extremely hard to research in the field as no one wants to admit to taking or offering bribes,” says Professor Abbink, a behavioural and experimental economist who has studied the relationship between corruption and reciprocity.

So the two researchers and their research team developed a laboratory experiment designed to mimic a common bribery situation.

They went to Argentina, which has a long history of corruption and gathered 426 participants from the Universidad Nacional del Sur, Bahía Blanca, Argentina. Argentina is ranked 107 out of 175 in the 2014 Corruption Perception Index.

Participants played a game where they were assigned the role of a “firm” or “official”. The firm could offer a set private payment (or bribe) to an official who could accept or reject the offer.

They were told that collusion between the firm and official would earn both parties some extra money at the expense of a non-governmental conservation organization.

The results revealed that participants in the role of firms were sensitive to the information about what was typical behavior by the public officials.

“We found that participants who knew they were interacting with a partner from a group with a majority of corrupt (as opposed to honest) partners offered twice as many bribes,” says Professor Abbink.

"The effect of sanctions (or punishments) was found not to be significant. The research shows that it is important for anti-bribery campaigners to ‘denormalise’ bribery rather than simply imposing tougher sanctions."

Understanding whether bribe taking was “normal” outweighed any factor such as the gender of participants, their economic status, whether they were enrolled in a business degree or whether they had experienced corruption personally in terms of whether they were likely to offer a bribe.

The Transparency International Corruption Perception Index shows there is a tendency for less developed countries to be more corrupt than developed ones. However, this research shows why there are still substantial differences in corruption levels across countries in Latin America that all still have similar development levels.

The paper explored the argument put forward by former World Bank chief economist Professor Kaushik Basu that only public officials who take bribes should be punished rather than the citizen seeking a service.

The research shows that bribery can be reduced up to 35% by not punishing the bribe-giver. Professor Basu recently highlighted the research findings when he visited Monash Business School in November 2016 to give a visiting lecture. 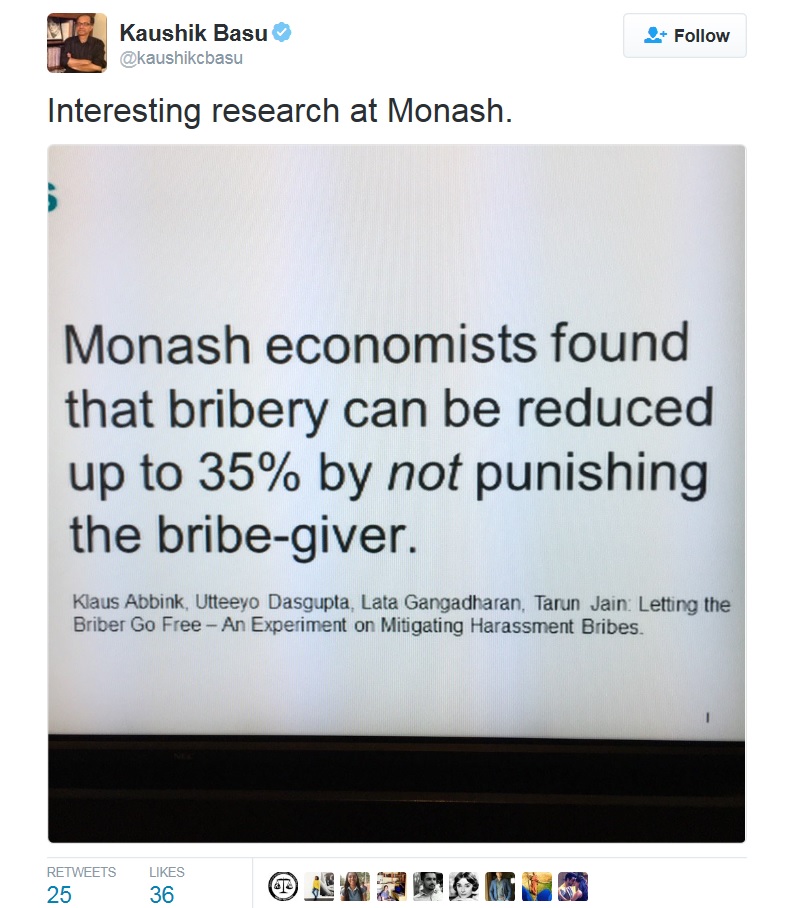 Professor Abbink argues the work points to the need for a rethink on how we deal with corruption.

Bribes may be paid by citizens or firms to receive favours in contracts or services from public officials. In some countries they are also exchanged for delivering services such as admission to public hospitals or for passport approvals.

In countries such as India, citizens are placed in a dilemma when faced by a bribe demand from officials.

If a citizen does not comply it may result in considerable inconvenience or loss due to the delay in the service while if they do pay they are still legally culpable.

The project, warded an ARC research grant, is designed to assist in developing effective policies to curtail harmful behaviour such as honour-killings or religious driven violence.