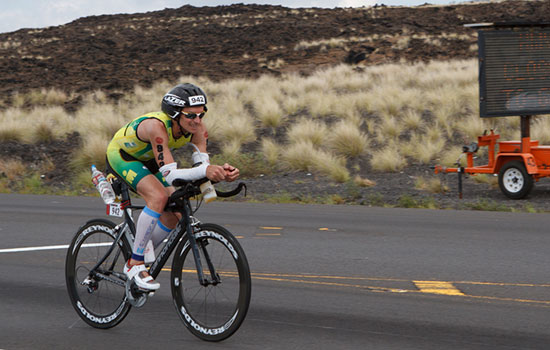 Monash University research has shown for the first time that athletes can train their gut to cope with food and fluid intake during strenuous exercise, resulting in reduced debilitating gastrointestinal symptoms, improved nutrient uptake, and improved performance.

Exercise can disturb gut integrity and function, and cause severe gastrointestinal symptoms including pain, nausea, vomiting and diarrhoea—a common feature of endurance exercise.

While it is already well established that carbohydrate intake during extended exercise (two hours or longer) is a key determinant of endurance exercise performance, the debilitating symptoms make essential eating and drinking during exercise very difficult.

“In our study, we developed a gut-training protocol that led to a 60 per cent reduction in gastrointestinal symptoms and resulted in a five per cent improvement in exercise performance,” Dr Costa said.

During the randomised controlled two-week gut training protocol, on a daily basis the two participant groups consumed either a carbohydrate gel-disc, or a placebo, every 20 minutes throughout the one hour running exercise.

Dr Costa said the running performance improvements observed after gut-training were likely due to symptom improvement, but increased glucose availability may have also contributed.

“These findings suggest that endurance runners may benefit from a structured gut-training protocol to meet individual needs and tolerance levels.”

However, Dr Costa is yet to determine whether a greater nutrient load, for example inclusion of protein and fat (controlled liquid formula) within the gut-training formulation and/or food would result in greater gut-training effects.

“Considering the diversity of responses we observed in our study, we suggest individualised gut-challenge protocols be an essential part of an athlete’s nutritional strategy assessment to inform training process, with the aim of reducing exercise-associated gastrointestinal symptoms and enhancing exercise performance,” Dr Costa said.

The paper is published in Applied Physiology, Nutrition and Metabolism