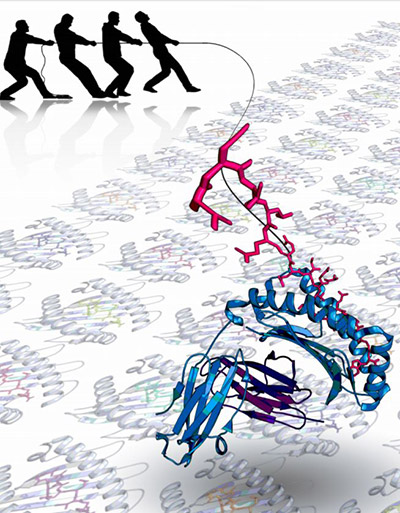 Stylised illustration of a peptide epitope extending from the N-terminal end of the HLA-I binding groove.

Declared a pandemic in 1987 by the World Health Organization, HIV infection has been responsible for 39 million deaths over the last 30 years. It remains one of the world’s most significant public health challenges and thus a greater understanding of how HIV functions is urgently needed so that researchers can design better therapies to target this devastating pathogen.

Published today in Nature Structural and Molecular Biology, the Monash-Cardiff team have made an important finding in understanding how HIV-I can evade the immune system.

They demonstrated, in molecular detail, how mutations within HIV can lead to differing ways in which key immune molecules, termed the Major Histocompatibility Complex (MHC), display fragments of the virus and how this results in the HIV remaining “hidden” from the immune system.

Principal author of the study, Dr Julian Vivian, said the team was yet to develop a complete understanding of how HIV outmanoeuvred our immune system.

“This work uncovers a novel mechanism for HIV immune escape, which will be important to incorporate into future vaccine development and may have broader implications for immune recognition of MHC molecules,” he said.

The recent finding is part of a much larger international alliance between the two Universities, with the Systems Immunity Research Institute (SIURI) at Cardiff University and Monash Biomedicine Discovery Institute (BDI), having signed a Memorandum of Understanding.

The five-year mutual agreement recognises a number of highly productive joint projects already being conducted around inflammation and immunity, and provides a mechanism for enabling additional innovative projects and student exchange in the areas of protective immunity, metabolism, autoimmunity and cancer.

A chief Investigator on the ARC CoE for Advanced Molecular Imaging, based at Monash BDI, Professor Jamie Rossjohn, said the find was exciting and unexpected.

“These results were only possible because of the close collaborative ties between Monash and Cardiff researchers.”

“We are bringing together excellence in molecular and systems level immunity in this partnership, and I know it will lead to many more great discoveries.”