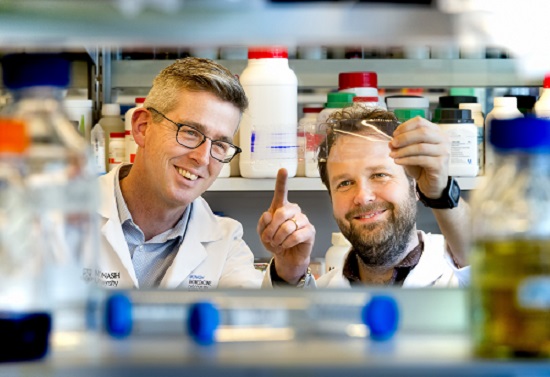 Researchers from the Monash Biomedicine Discovery Institute in Melbourne have identified two new genes linked to a major cause of mitochondrial disease. Their research opens the way for better genetic diagnosis of the disease and could also help to identify potential therapeutic targets for treatment.

Mitochondrial disease is an illness that robs its sufferers of energy, and damages muscles and major organs like the brain and heart. About one in 5000 babies – or one Australian baby born each week – are born with a severe form of the disease, which can often lead to an early death.

Dr David Stroud and Professor Mike Ryan from the Biomedicine Discovery Institute headed the research team, with their research published today in Nature.

Professor Ryan said the team identified not only two new genes linked to one of the causes of mitochondrial disease, but also uncovered the importance of 30 protein components in the engine that drives the mitochondria.

“The fact that so many different genes contribute to the function of our mitochondria explains why so many patients remain undiagnosed – it’s a complex disease,” Professor Ryan said.

Mitochondria are the powerhouses of our cells, taking sugars and proteins from the food we eat and turning them into energy in a form our body can use. This process gives us more than 90 per cent of the energy we need for our bodies to function properly.

In people with mitochondrial disease, the mitochondria are unable to produce this energy, which can lead to organ failure, and potentially, death.

To unravel the genetic mystery behind a major cause of mitochondrial disease, the researchers studied Complex I, one of the engines that helps drive the mitochondria. Professor Ryan said human Complex I was made up of 30 extra protein components than the Complex I of bacteria.

“This has always been a mystery because both bacterial and human Complex I have the same overall function,” Professor Ryan said.

“Our research shows almost all the additional protein components are critical to human health.”

Using a cutting-edge gene editing technology, called CRISPR/Cas9, the researchers modified a series of cells to have a different genetic make-up – each cell type lacked a unique gene relating to a Complex I protein only found in humans. The method they developed could be used to study more of the genes responsible for mitochondrial disease in laboratories around the world.

Professor Ryan said the extra protein components humans have might keep Complex I more stable than the Complex I found in bacteria.

“This might be necessary because our cells live so much longer than bacteria, which divide every 20 minutes.”

“These genes can now be added to genetic screening panels globally, leading to earlier diagnosis of more people with the disease,” Dr Stroud said.

“Advances in diagnosis of mitochondrial disease benefit families by ending their often prolonged and painful odyssey of tests, misdiagnosis and wrong turns.”