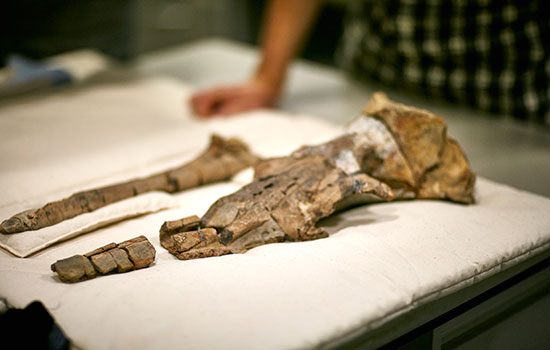 Monash University scientists have played a key role in discovering the origin of filter feeding in baleen whales – the largest animal known to have ever existed.

The discovery is detailed in a paper co-written with international researchers and palaeontologists from Museum Victoria. ‘Alfred’ the 25- million-year-old fossilised whale skull was unveiled at the Museum today.

“Alfred shows how ancient baleen whales made the evolutionary switch from biting prey with teeth to filtering using baleen,” said Monash Science Senior Research Fellow, Dr Alistair Evans, one of the authors of the paper.

“They first became suction feeders. Feeding in this way resulted in reduced need for teeth, so over time their teeth were lost before baleen appeared.”

There has been a lot of mystery around how and when baleen first formed.

“But we now have long-sought evidence of how whales evolved from having teeth to hair-like baleen – triggering the rise of the biggest beasts on the planet,” said Dr Evans.

Nick-named ‘Alfred’, the fossil skull is from an extinct group of whales called aetiocetids, which despite having teeth were an early branch of the baleen whale family tree. Alfred’s teeth show exceptionally rare evidence of feeding behaviour suggesting an entirely new evolutionary scenario – before losing teeth and evolving baleen, these whales used suction to catch prey.

Today’s baleen whales – such as the Blue and Humpback – don’t have teeth. Instead, they have evolved the hair-like structure called baleen that allows them to filter huge amounts of tiny plankton, like krill, from seawater.

”But what has really eluded scientists since Charles Darwin is exactly how whales made the complex evolutionary change from biting prey with teeth to filtering plankton using baleen.”

This unusual type of tooth wear is only seen in a few living marine mammals (such as walrus) that use a back-and-forth movement of their tongue to suck in prey, and incidentally rough material like sand.

Alfred shows how ancient baleen whales made the evolutionary switch from biting prey with teeth to filtering using baleen: they first became suction feeders. Feeding in this way resulted in reduced need for teeth, so over time their teeth were lost before baleen appeared.

The research team is now uncovering the rest of Alfred’s skeleton, as well as other fossils from Australia that provide exciting insights on how baleen whales began.