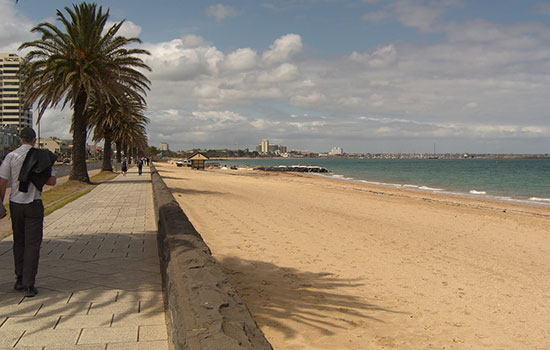 The popular Middle Park beach is under the international spotlight following a world-first study by Monash University chemists who have discovered how sand ‘holds its breath’.

The discovery, which has been published in Nature Geoscience, has astonishing implications and potential uses in the biofuels industry, according to lead authors Associate Professor Perran Cook and PhD student Michael Bourke, from the Water Studies Centre, School of Chemistry.

Sand is full of algae called diatoms, but this environment is mixed about continuously so these organisms might get light one minute then be buried in the sediment with no oxygen the next.

“This is a new mechanism by which this type of algae survive under these conditions,” said Associate Professor Cook.

“Our work has found that they ferment, like yeast ferments sugar to alcohol.

“In this case the products are hydrogen and 'fats', for example oleate, which is a component of olive oil.”

Sand often has high concentrations of algae, which are highly productive and an important food source for food webs in the bay.

It is important to understand how these organisms survive in the harsh environment in which they live.

In this work, scientists present the first study of the importance of anoxic micro-algal metabolism through fermentation in permeable sediments.

They combined flow-through reactor experiments with microbiological approaches to determine the dominant contributors and pathways of dissolved inorganic carbon production in permeable sediments.

They show that micro-algal dark fermentation is the dominant metabolic pathway, which is the first time this has been documented in an environmental setting.

“The finding that hydrogen is a by-product of this metabolism has important implications for the types of bacteria present in the sediment,” said Associate Professor Cook.

“It is well known that bacteria in the sediment can 'eat' hydrogen, however, these hydrogen eating bacteria may be more common than we previously thought.”