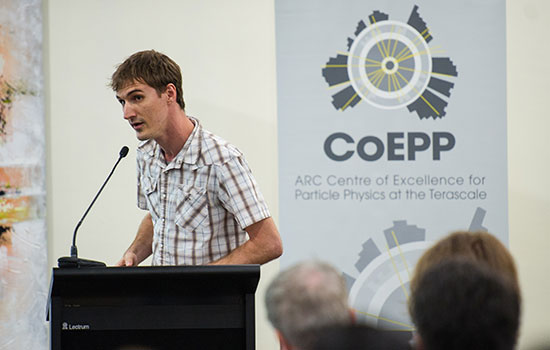 Graham White is yet to complete his PhD in theoretical particle physics, but that hasn’t stopped him from publishing a book – the first review of its kind – on a perplexing concept in the field: electroweak baryogenesis.

Graham’s book, A Pedagogical Introduction to Electroweak Baryogenesis, is a particle physics primer on baryogenesis. Baryogenesis theories look to explain matter-antimatter asymmetry, or, why there is so much matter and so little antimatter in the universe. Understanding this asymmetry is of vital importance because in the early universe something happened so that matter and antimatter were created in different amounts. We would not be here today had this not have happened.

The book provides a comprehensive introduction to mechanisms for baryogenesis and is aimed at graduate students and more senior academics new to the field. It is the first self-contained review on the subject, and quite an achievement considering its complexity. The idea for the book came from Graham’s own efforts to understand the complex literature on the subject.

“When I was looking at this area I realised there was no single resource that primed researchers on baryogenesis,” Graham said.

“So I thought, ‘why don’t I just put one together’. I decided to make an online resource so that no other student would have to wade through the confusing literature like I did. Then when Csaba read the draft he convinced me it was good enough to be a book.”

“Baryogenesis is a challenging research field -  it is plagued by confusing literature, implicit assumptions, ad-hoc approximations and intractable calculations that are perplexing enough for a seasoned researcher. Yet, Graham’s book cuts through the subject like a knife through butter.”

“Graham is a brilliant scientist and an independent thinker. He is on the right track to becoming a theoretical physicist who will leave a lasting impact in his research field.”

The CoEPP is a collaborative research venture between the Universities of Adelaide, Melbourne, Sydney and Monash. Its research looks at some of the fundamental questions in science and its scientists are foundation members of the ATLAS experiment at the Large Hadron Collider at CERN.