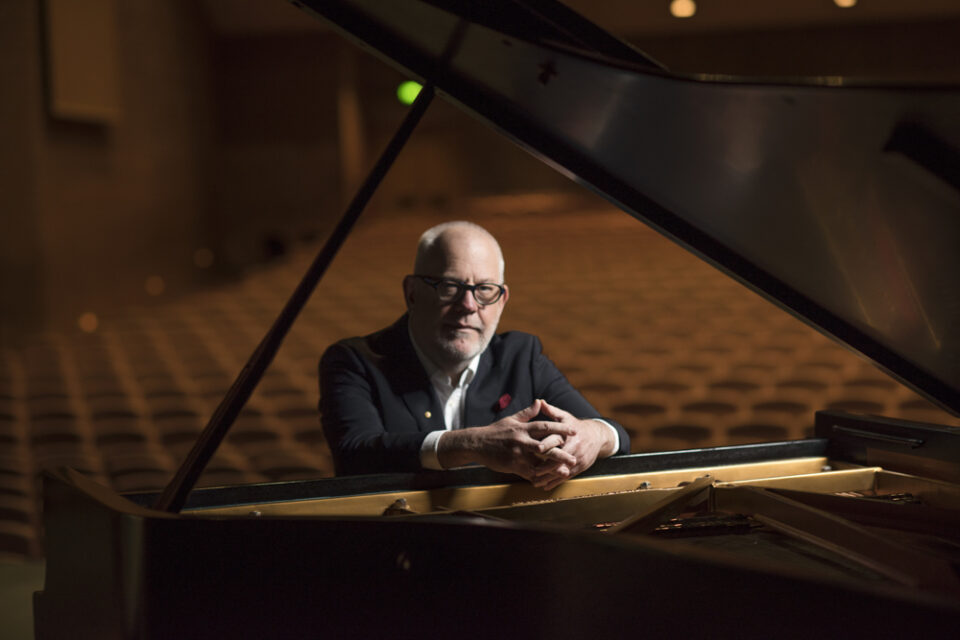 One of the most refreshing elements of contemporary jazz practice is the way it has become less concerned with adhering to narrow stylistic conventions and more about the open embrace of innovative musicianship and composition across all genres.

Whether it’s American legend Miles Davis (known for his groundbreaking jazz-rock record Bitches Brew) or current-day movers and shakers like jazz bassist and vocalist Esperanza Spalding (known for her inventive blend of influences including R&B, funk, Brazilian samba and Cuban) what all jazz greats have in common is their determination to constantly challenge and inject new perspectives into their practice.

Following the energetic success of last year’s event, MLIVE’s highly-anticipated Jazz Greats Weekend returns this April with two concerts coupling Australian legends from one end of the improvised music spectrum with those at the other. In Spinoff, Vince Jones is joined by one of Australia’s finest vocalists Megan Washington and a 20-piece jazz orchestra, and in Edge of Reality – the Elvis Presley Songbook two of Australia’s most celebrated vocalists, Joe Camilleri and Vika Bull, will be joined by six-time ARIA award winner Paul Grabowsky and his Sextet to bring you a radical new perspective on Elvis Presley, one of the 20th century’s most prolific musicians.

We were fortunate enough to talk to featured artist and the Monash Academy of Performing Arts’ Executive Director Professor Paul Grabowsky AO to learn more about what drew him to the soundtrack of 1990s television series Come In Spinner, how he went about coupling artists for each concert and why he thinks Elvis’s music continues to resonate with contemporary audiences across the world.

MLIVE: In a nutshell, what is MLIVE’s Jazz Greats Weekend all about?
Paul Grabowsky AO: Jazz means so many things to people. It can often depend on what their own experience of it is, at what point in their lives they were introduced to it, whether they’ve heard it live or only ever as ambient music in a cafe, and so on. With Jazz Greats we are appealing to audiences who may not necessarily be modern jazz aficionados but simply lovers of great music. It looks at jazz from a number of perspectives, covering a lot of the history and traditions, while at the same time speaking to the now. That’s what jazz really is: holding to the now.

‘It looks at jazz from a number of perspectives, covering a lot of the history and traditions, while at the same time speaking to the now. That’s what jazz really is: holding to the now.’

MLIVE: How did you go about pairing the artists for each of these concerts?
Paul Grabowsky AO: Spinoff relies heavily on the ‘Great American Songbook’, and the singers need to be deeply steeped in the traditions that best exemplify it. Both Vince Jones and Megan Washington know how to deliver this material with integrity, musicality and authentic emotion. People will be very moved and excited, I think. The roots of Elvis are in R&B, blues and country swing — a real fusion of roots styles. Elvis was like a radio antenna, picking up all the stations around him. Both Joe Camilleri and Vika Bull are expert in interpreting these traditions and bringing them into a contemporary context. I can’t think of two better singers to carry this off, especially as they both also love jazz.

MLIVE: Can you tell us a little bit more about Spinoff. What initially drew you to the soundtrack of the 1990s television series Come In Spinner?
Paul Grabowsky AO: In the first concert Spinoff we revisit an important relate from the early 1990s, Come In Spinner, the soundtrack to a popular ABC TV series. It helped make singer Vince Jones a household name, an especially good thing as he is in my view one of the finest male jazz vocalists in the world. In this concert, songs from that album, themselves greatly-loved hits originally made famous by singers such as Frank Sinatra, will be rearranged and refreshed by one of Australia’s brightest musical talents Steve Newcomb, and in a real coup Vince will be joined by the quintessential Australian new-generation superstar, Megan Washington. Megan’s roots lie in jazz, but her extraordinary vocal talents know no boundaries. Some of her hits will be included in a concert, which will feature a 20-piece orchestra.

MLIVE: What can our audience expect from Steve Newcomb’s all-new arrangements of the adored soundtrack?
Paul Grabowsky: Steve demonstrates great taste, elegance and excitement in his arrangements. He has a keen ear for colour, beautiful chord voicing and surprising twists and turns. As a beautiful pianist himself, he understands how to write music that musicians love to play. He is a superlative talent and I expect these arrangements will be played for years to come.

MLIVE: The second concert Edge of Reality is centred on the work of rock and roll legend Elvis Presley. What are your favourite Elvis songs and why?
Paul Grabowsky AO: Elvis hit the ground running as a recording artist. There are so many great songs: from the Sun Studios period I love Mystery Train, from the early RCA period, classics such as Heartbreak Hotel and Return to Sender, but then as you progress through the hundreds of recordings there are such gems as Surrender, True Love Travels on a Gravel Road, In the Ghetto, Surrender; the list goes on.

MLIVE: How have you gone about arranging his much-loved classics, and what has the greatest challenge been?
Paul Grabowsky AO: I’m always thinking of three things: the song itself, with particular regard to its lyric, the singer’s relationship to the song, and the musicians we have hand-picked to perform, some of the best players around. All of these things need to be respected, and I’m excited about shining a new light on some very familiar material. I know how sacred some of this stuff is, but, hey, it’s jazz, right?

MLIVE: Why is it that Elvis’s music continues to resonate with contemporary audiences across the world?
Paul Grabowsky AO: Elvis was in a way the first post-modern phenomenon, a media superstar who outgrew the ability to function as a ‘normal’ star. He became a brand, then the franchisee of that brand. Hence the quasi-religious fascination, even canonisation of a humble good ol’ boy who somehow came to embody the massive contradictions inherent in the USA, including the embrace of excess that finally ended his life. But at the end of the day, he was a truly great performer, and that is what we are here to celebrate.