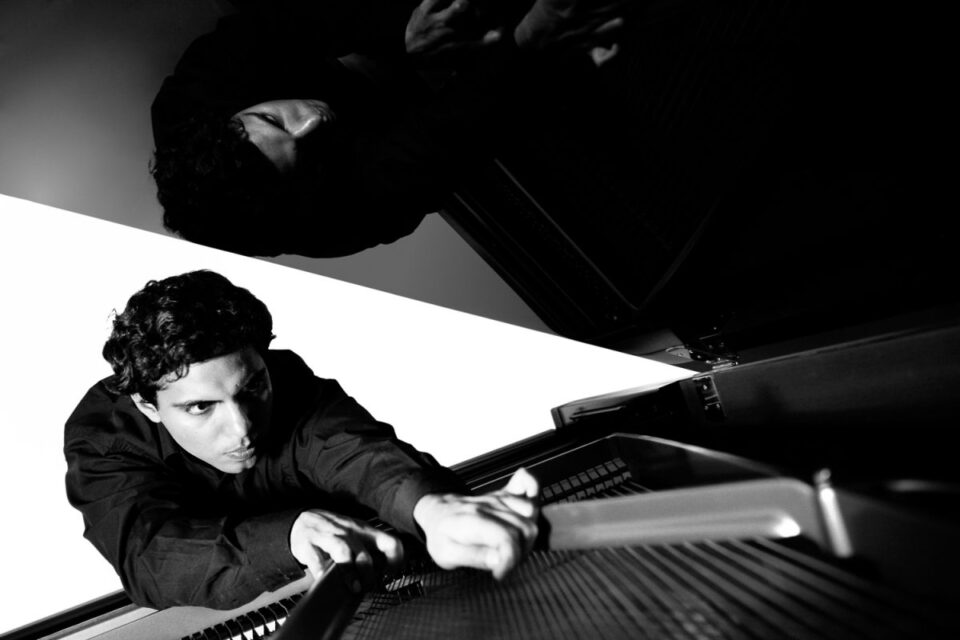 London and Sydney-based pianist and composer Zubin Kanga has made a name for himself with works that are innovative, perplexing and sophisticated. A specialist in contemporary piano music, his expressive and finely controlled oeuvre focuses on extending the possibilities of the pianist through the body and multimedia; challenging the ways we play and listen to the piano.

Ahead of his upcoming recital of American minimalist classics for solo piano, ‘Rhythmic Kaleidoscopes’, we spoke to the artist about his foray into contemporary music, the underground artistic culture of his favourite European city and who in London is inspiring him the most.

MLIVE: Your work focuses on expanding the possibilities of the piano through interactive multimedia, including live and fixed electronics, film, live video, motion sensors and AI. What is it about the coupling of art and technology that interests that you the most, and what do you hope to achieve?
Zubin Kanga: I really love the power of these new technologies to create a really engaging, immersive experience for the audience. There’s so much scope and variety possible, and I’ve found that even audiences who might find contemporary music daunting really enjoy these concerts. As a film buff, I get a real buzz from the works I’ve done with film, either using classic films like Nicole Lizée’s Hitchcock Etudes or creating new films (often with me acting in them) like Adam de la Cour’s Transplant the Movie!. And more fundamentally, digital technologies are such a huge part of our lives now, and art of this type allows us to delve deeper into the new ways that our life and culture has changed in the internet age.

MLIVE: Was there a defining person or experience that influenced your decision to pursue music professionally?
Zubin Kanga: There were many early mentors, but it was discovering Olivier Messiaen’s music as a teenager that first converted me to contemporary music, and I immediately wanted to play this music and also to compose music as innovative and beautiful these works. Creating music at the cutting edge was my goal from this point, but it was many years, a lot of encouragement and inspiration from mentors before I really knew that I could make a career from it.

MLIVE: You’ve collaborated with some of the world’s leading composers including Steve Reich, Michael Finnissy and Thomas Adès. How do you approach collaborative projects and what value do they bring to your practice?
Zubin Kanga: Most of my work is collaborative—I mostly work with living composers these days, and in most cases they are very keen to talk to you about your approach to interpreting their work. And this is even more important with new commissions, where it really is a shared creative process. In approaching these collaborations, I always like it to be a meeting of equals, whether the composers are many years my senior like Michael Finnissy or Brett Dean, or if they are young students looking for guidance. Having an open and honest dialogue throughout the process usually results in better art, and sometimes a masterpiece.

‘Having an open and honest dialogue throughout the process usually results in better art, and sometimes a masterpiece.’

MLIVE: You’ll be performing an intimate and immersive recital at the Robert Blackwood Hall on Thursday 9 August. Can you tell us about the repertoire and what drew you to each of the pieces?
Zubin Kanga: The works are all classic American minimalist works by some of the great composers of this tradition. There’s one of the first minimalist works ever written, Terry Riley’s mesmerising first keyboard study; some punchy miniatures by leading composers of the New York institution Bang on a Can (David Lang and Julia Wolfe); an elegant and hypnotic John Cage piece which was really influential on the composers who followed; a meditative work by John Luther Adams inspired by icy landscape of Alaska and John Adams’ Phrygian Gates, not only one of Adams’ most famous works, but one of the greatest piano works of the late 20th century, combining the virtuosity and bold pianistic colours of the Romantic piano canon with the driving rhythms and cycling harmonies of post-minimalism.

MLIVE: Leafing through your CV, you’ve travelled extensively. Is there a particular location that’s left a long-lasting impression on you?
Zubin Kanga: I love the different characters of big cities. I was particularly impressed by Berlin and its great underground art and music culture, as well as the fact that it has the energy of a young city, recently reborn with the scars of The Wall still visible throughout.

MLIVE: What have you read or seen recently that has inspired or challenged you?
Zubin Kanga: This year has been a bumper year for contemporary music in London, with a lot of composer collectives putting on excellent series that are really redefining the art form. My favourite performance was by British composer, Neil Luck and his group ARCO, performing Live Guy, Dead Guy, a music-theatre work involving three performers who play string instruments, act as a family at the dinner table, create all sorts of extra sounds from household objects and turn into zombies. Combined with video, voiceover, and a lot of broken crockery, it was innovative, gripping disturbing and very funny. This sort of interdisciplinary work is the most exciting music of the moment, and I’m looking forward to bringing a recital of it to Australia on a tour next year.