Dr Ian Wilding has been recognised with an honorary doctorate. 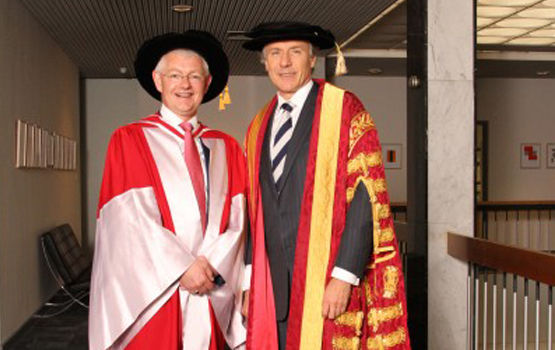 The honorary degree of Doctor of Laws honoris causa, was conferred on Dr Wilding at a ceremony at the University’s Clayton campus yesterday.

Dr Wilding, a pharmaceutical drug development consultant and entrepreneur, was recognised for his major contributions to international medicine development, regulatory authorities and pharmaceutical science organisations in Europe, Japan and the US.

He was the guest speaker for the University’s Faculty of Pharmacy and Pharmaceutical Sciences flagship public event - the annual Emeritus Professor Barry L. Reed Distinguished Lecture. Looking ahead to 2020, he discussed potential trends for those working in the pharmaceutical industry to a record attendance of 300 guests.

Professor Bill Charman, Dean of the Faculty of Pharmacy and Pharmaceutical Sciences and Director of MIPS, said Dr Wilding was an internationally recognised thought-leader, scientific innovator and entrepreneur in drug discovery and delivery.

“These advances have had a direct and beneficial impact on patients throughout the world through better design and manufacture of more clinically effective oral and inhaled medicines.”

Dr Wilding has published over 250 research papers, abstracts and patents.

In 1997 he was appointed as an expert scientist for the FDA in the area of food effects on drug bioavailability.  He has also served on several UK and European Innovation and Enterprise Advisory Boards to include the UK CBI Technology and Innovation Committee and the European Commission FP7 Advisory Committee for SMEs. In 2005 Dr Wilding received the Controlled Release Society career achievement award in oral drug delivery and in 2013 became an eminent fellow of the UK Academy of Pharmaceutical Scientists.

Dr Wilding is also the inventor of the Enterion capsule, a remote controlled device for site-specific delivery within the human intestines to evaluate drug absorption properties that has now been dosed to several thousand subjects.

In a long career commercialising science, Dr Wilding was also the cofounder of R5 Pharmaceuticals, Zysis, Modern BioSciences and BioCity Nottingham.  In addition to several Board roles, he currently consults for over 30 pharmaceutical and biotech companies on a wide range of strategic and technical drug development issues. He has published over 250 research papers, abstracts and patents.