Inhaled Oxytocin innovators answer the call to save lives

A global innovation that has the potential to prevent women in developing countries from the fatal loss of blood after childbirth has seen Dr Michelle McIntosh of the Monash Institute of Pharmaceutical Sciences win The Australian Innovation Challenge and a $30,000 prize.

Dr McIntosh has been - and remains - on a crusade to raise millions of dollars to fund an innovation that could save an extraordinary number of lives.

Every year, more than 100,000 women around the world die from blood loss after childbirth. A simple injection of oxytocin can prevent or treat postpartum bleeding, but there are difficulties in developing countries, as it needs cold storage, and to be administered by doctors or nurses.

Dr McIntosh and her team are working on developing a device from which women can inhale an oxytocin dry powder immediately after delivery.

"An inhaled product would negate the need for cold chain storage, remove the risk of needle stick injuries, and could be used by all levels of healthcare workers," Dr McIntosh said.

"It's a real honour to be recognised in this way. Every success brings us one step closer to our overarching goal - making this product widely available to all women in developing countries."

Director of MIPS and Dean of the Faculty of Pharmacy and Pharmaceutical Sciences at Monash, Professor Bill Charman, congratulated the team.

"On behalf of the University, I congratulate Michelle, Pete Lambert, Richard Prankerd, David Morton and their fabulous inhaled oxytocin research team - these two awards are further and wonderful recognition of a collaborative partnership that has the potential to deliver major health impact to women in developing countries throughout the world," Professor Charman said. 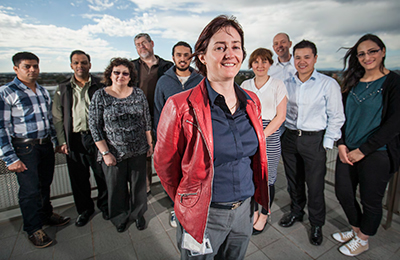