Monash researchers have discovered that an insulin molecule produced by cone snails may enable the development of faster-acting therapeutic insulin. 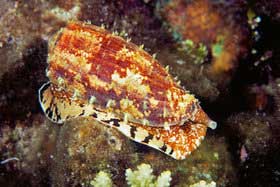 In a paper published today in Nature Structural & Molecular Biology, the Monash Institute of Pharmaceutical Sciences’ Professor Ray Norton and Dr Chris MacRaild, working in collaboration with researchers at the Walter and Eliza Hall Institute of Medical Research (“WEHI”), Flinders University, La Trobe University and the University of Utah, have revealed that cone snail insulin could begin working as quickly as five minutes. The fastest-acting insulin currently used to treat diabetes takes around 15 minutes to take effect.

Human insulin is a hormone that is produced in the pancreas and secreted to aid in the body’s uptake of glucose. Diabetes mellitus disorders arise from impairment of the body’s normal production of insulin. The most effective treatment for diabetes is injection of synthetic insulin.

In the form of insulin naturally stored in the human pancreas, insulin molecules stick together to form aggregates of six molecules. Injected insulin must dis-aggregate into individual molecules to be effective, a process that can take up to an hour. The fastest-acting insulin on the market, Humalog, still takes 15-30 minutes to become active.

Professor Norton and Dr MacRaild discovered that the insulin produced by the cone snail Conus geographus does not aggregate – it is “monomeric”, meaning its molecules do not stick together. As a result, it acts more quickly than versions of insulin that do.  Tests on insulin receptors in the lab showed that although the snail insulin was only slightly less effective than human insulin, and could possibly start acting in five minutes.

Insulin as a weapon

The Conus geographus snail is a predatory cone snail that eats fish. Insulin is one ingredient in the cocktail of compounds known as the ‘nirvana cabal’ that it secretes into the water, causing the blood sugar in nearby fish to plummet and sending the fish into hypoglycemic sedation. Once the fish is sedated, the snail engulfs and consumes it.

Because the snail has to induce insulin shock in its prey very rapidly, it has evolved something very fast acting.

The team still needs to conduct more experiments to measure how quickly snail insulin, or a modified human insulin, would work when injected. Fish are affected almost instantly because the insulin passes over the gills. In humans, the process may take a few minutes longer.

The full paper can be found here.

Funding for the study was provided by the National Health and Medical Research Council of Australia, the National Institutes of Health, USTAR and the European Commission.