The ground-breaking research by Professors Arthur Christopoulos and Patrick Sexton from the Monash Institute of Pharmaceutical Sciences offers hope for people with chronic conditions. According to the researchers, medicines that can be “turned up” or “turned down” rather than “on” and “off“ will give doctors more variability to tailor treatment to a patient’s medical needs. Medicines based on this principle will allow patients to lead a more normal life without the side effects associated with existing drugs.

Their research into G protein-coupled receptors (GPCRs) has begun to unravel the complexities of drug action that could lead to more targeted medicines. The “dimmer switch” of a protein, known as the allosteric site, allows the targeted protein to be dialled up or down in a way that was not previously possible. 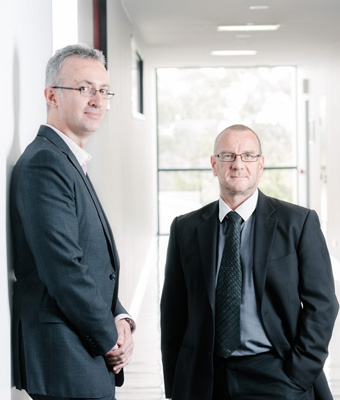 Professor Sexton said their work could significantly advance the treatment of chronic conditions.

“Many medicines have unwanted side effects because they work by simply turning receptors on or off, even though we know that most of these proteins have the potential for more graded levels of response that can become highly relevant in the contexts of tissue specificity, disease and individual patient profiles. We have discovered a more tailored way to exploit this functionality, by targeting regions on the receptors that act more like dimmer switches rather than on/off switches,” Professor Sexton said.

Both professors are world leaders in the study of G protein-coupled receptors (GPCRs), the largest class of drug targets, and the application of analytical pharmacology to understand allosteric modulation. In recent years their work has challenged traditional views of how medicines were thought to work.

“We have found molecules that can subtly dial up or dial down the effect of the receptor protein, or even ‘dictate’ which pathways it can or can’t signal to. This means we could in theory treat a range of diseases with this approach more effectively and safely by avoiding some of the side effects associated with standard on/off-type drugs. Because an allosteric mechanism is more subtle and ‘tuneable’, medicines based on this principle can allow patients to lead a more normal life, especially those with chronic conditions,” Professor Christopoulos said.

Dr Andrew Weekes, Medical Director, GSK Australia, said GSK is proud to be able to support local researchers with the Award, now in its 36th year.

“The award has been given to some remarkable people over the years, many of whom are eminent academics in their field. GSK is honoured to support the research community and excited by their discoveries, which we believe will one day help patients,” Dr Weekes said.

Professor Christopoulos said winning the GSK Award for Research Excellence is a great recognition of the efforts of all the scientists who have worked in this area over the years, often in the face of early scepticism.

“Science relies on the efforts and insights generated from dedicated people over many years. For us, this award is thus also an acknowledgement and testament to our colleagues, collaborators, students and postdocs who have helped us take a theoretical concept to the point where today we are creating a new paradigm in drug discovery,” Professor Christopoulos said.

“This award will greatly assist us in progressing our research on allosteric modulation into new areas, and accelerate the possibility of helping patients suffering from a range of diseases that represent global health burdens but remain sub-optimally treated,” Professor Sexton said.

Among the previous recipients of the GSK Award for Research Excellence are Australia’s most noted scientific researchers, including Professor Tony Basten (1980), Professor Nicos Nicola (1993) and Professor Peter Koopman (2007). The 2015 GSK Award for Research Excellence was awarded to James McCluskey (University of Melbourne) and Jamie Rossjohn (Monash University) for their research into the immune system.