Monash researchers have solved the first crystal structure of the A1 adenosine G protein-coupled receptor, an important therapeutic target for treating cardiac injury after a heart attack, memory disorders and chronic pain. The study, published today in the prestigious journal, Cell, details atomic-level information of the A1 adenosine receptor protein and reveals that the physical shape of its hormone binding pocket is very different from that of a related adenosine receptor, providing new clues about how drugs can be used to more selectivity target these proteins. 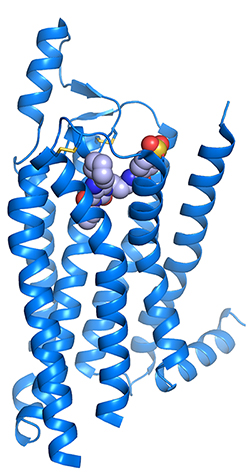 Led by Professors Arthur Christopoulos and Patrick Sexton from the Monash Institute of Pharmaceutical Sciences (MIPS), the researchers utilised a technique involving crystallisation of the A1 adenosine receptor protein, followed by exposure to high-intensity x-ray beams to determine the structure of the final receptor at an atomic level based on the way the x-rays diffracted when they collided with the crystals.

The team compared their result with another subtype of the adenosine receptor family with known crystal structures, the A2A subtype. Although they found that the amino acid sequences that make up the binding pockets of both receptors are very similar, they discovered that the binding pocket of the A1 adenosine receptor is much wider compared to that of the A2A subtype. This difference in the physical shape of the binding sites can explain how drugs can be selective for one subtype over another.

“The narrow binding site of the previously-solved A2A adenosine receptor restricts certain types of drugs from binding,” says the study’s co-first author, Dr Alisa Glukhova, “whereas different interactions become possible due to the ‘openness’ of the binding pocket of the A1 receptor subtype.”

Solving the molecular structure of the A1 receptor also revealed another surprise, namely that the large binding cavity of the receptor is, in fact, a combination of two pockets: the primary binding pocket where traditional hormones or synthetic activator and inhibitor drugs can bind, and an secondary binding pocket, which may be targeted to fine-tune the activity of the receptor. Drugs that bind to such alternative sites are called “allosteric modulators”, because they have the potential to modify the activity of the protein, much like a “dimmer switch” can modify the intensity of a light signal in either a positive or negative direction.

However, all allosteric modulators for the A1 adenosine receptor that have been identified to date seem to display mixed behaviours, depending on the hormone or drug that co-binds to the primary site. This behaviour, which has long puzzled scientists, can now be better understood as a result of the Monash study. By using computational modelling, the researchers discovered that, in the absence of other drugs, allosteric modulators for the A1 adenosine receptor can also bind to the primary pocket, thus explaining their potential for mixed effects depending on which pocket the drugs ultimately target.

Professor Christopoulos says that this new discovery can improve our understanding of how allosteric modulators and receptors interact, and can lead to the design of more selective drugs with fewer side effects for a range of neurological, cardiovascular, pain and other diseases.