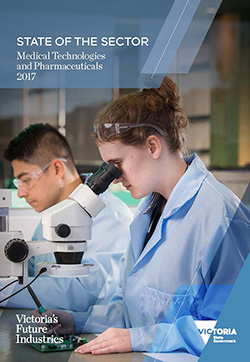 A report from the Victorian Government has highlighted two initiatives associated with the Monash Institute of Pharmaceutical Sciences as major contributors to one of Victoria’s fastest-growing sectors.

The State of the Sector: Medical Technologies and Pharmaceuticals 2017 report provides an update on the Victorian Government’s strategy for the sector, identified as vital to the state’s future economic prosperity.

The medical technologies and pharmaceuticals sector is one of eight key sectors receiving support through the Future Industries Fund, employs more than 23,000 people and generates more than $12.7 billion in revenue each year in the state.

The foreword to the report singles out two major recent investments as crucial to augmenting Victoria’s position as one of the world’s leading locations for the development and manufacture of medical technologies, biotechnologies and pharmaceuticals: the Medicines Manufacturing Innovations Centre (MMIC) and BioCurate.

Both are initiatives in which MIPS plays a leading role.

The MMIC, a collaboration between Monash, the Victorian Government and pharmaceutical company GlaxoSmithKline, provides Victoria’s medicines manufacturers with access to specialist scientific capabilities.

BioCurate, a transformative collaboration between Monash University and the University of Melbourne, focuses on translating drug discoveries into a form that attracts investors or other commercialisation partners.