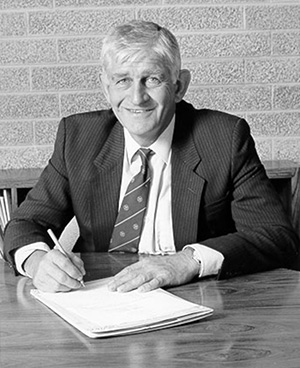 He was a member of staff at for 27 years, starting in 1961 as a lecturer in medicinal chemistry. He was then promoted to head of department, before his appointment in 1979 as dean of the college.

During his time as dean, he initiated a strong focus on research into drug development and health advancement, establishing some of the global links that have been fundamental to the international reputation that the faculty continues to enjoy today.

He also led the college through a period of growing emphasis on medicine use and safety. The undergraduate course was reviewed in 1980, and one of the innovations in the revised course was the introduction of lectures on communications, pharmacy practice and human behavior. The VCP was the first institution in Australasia to introduce a human behaviour component into its pharmacy course.

“Geoff was a leader – he had great foresight and vision. He was generous to those he worked with, and always saw opportunities that made tomorrow better. He had a big personality, and it was always enjoyable to be with him. the Faculty would not be what it is today without Geoff’s contributions and leadership”, said Bill Charman, Dean, Faculty of Pharmacy and Pharmaceutical Sciences. Professor Charman isn’t the only staff member to remark upon the strength of Dr Vaughan’s personality.

“He was a good fellow with a big strong voice, and everybody loved him. He built on the work begun by Nigel Manning in transforming a small technical college to an academic institution of some note,” said Alistair Lloyd, AO, former PSA president, executive officer of the college and longtime friend of the faculty. Dr Vaughan took his bachelor and master degrees from the University of Sydney and obtained his PhD from the University of Melbourne.

He was also a former rugby union prop forward who represented Australia. He was selected for the 1957–58 Wallabies tour of Britain, Ireland, France, the US and Canada. He was also vice-captain of the team that played three matches against the New Zealand Maori side. Foundation board member John Ware, AO describes how Dr Vaughan’s proudest memory was running on the field in Cardiff as a Wallaby. “Geoffrey was a great team player, a natural at all things he did. He was a devoted family man and created a sense of family among the pharmacy fraternity. He always remained connected to the faculty,” Mr Ware said. Following his tenure as dean of VCP, Dr Vaughan became the director of the Chisholm Institute of Technology and led that institution through its merger with Monash University. He then served as deputy vice-chancellor (research) at Monash until 1992, after which he was appointed to the position of national manager and CEO of the Australian government’s Therapeutic Goods Administration (TGA).

In 2003, Dr Vaughan was awarded a Centenary Medal for his outstanding service to medical and pharmaceutical research. In 2006, he was recognised with an Order of Australia (AO) in the Queen’s Birthday Honours List. The citation for his award read: “For service to scientific research and development, particularly through contributions to the development of government policy initiatives, to the growth of innovative technology-based Australian companies, and to education as a mentor and supporter of young scientists.”

He continued his record of overachievement well into retirement. In the 2012 Royal Melbourne Show he scooped the pool in the cooking section for handmade breads. His five entries won two firsts, two seconds and a third.

Dr Vaughan was a generous donor to the faculty. The scholarship that bears his name, the Vaughan Scholarship, offers additional financial support to high-performing PhD candidates in the chemical and biological sciences at the Monash Institute of Pharmaceutical Sciences.

The faculty is forever grateful for Dr Vaughan’s significant contributions, and his friendship. As an academic and professional community, we are deeply saddened by his loss.