The man behind the barracks: Colin Hall Simpson

World War I stands as a byword for the squandering of young lives on a grand scale. In the popular imagination at least, the story belongs to those who fell.

It’s easy to forget that many young soldiers survived the conflict – though not necessarily unscathed – and went on to live long, productive lives. Some of them were even able to draw upon their military experience as a strength, parlaying it into successful post-war careers.

One such soldier was Colin Hall Simpson, a pharmacist-soldier whose grounding in both disciplines equipped him to ascend to the highest levels in each.

Born in St Kilda to Scottish parents in April 1894, Colin Simpson was an only child. His father was a plumber and they lived in a modest home on High Street.

In 1910, military training became compulsory for all medically fit boys aged from 14 to 18, and Colin joined the 49th Prahran Infantry Cadets in 1911 at the age of 15. He progressed from a Junior Cadet to Sergeant, and by 1914 had been promoted to Lieutenant in the Senior Cadets. By early 1913, he had also become a indentured apprentice to pharmacist John Charles Pickford. Of the 29 apprentices in 1913, Colin made friends with Eric Bisset and Alan Jones, who were part of the apprentice registrants.

Colin Simpson submitted his application for a Commission in May 1915, arriving in England for the final stages of his training in 1916. By 1917 he was serving as part of the 3rd Division Signal Company in Flanders. 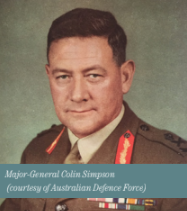 “Communications were a vital element throughout the campaign. The standard methods of communication were used although wireless links were not entirely successful. Dispatch riders were used extensively, messages being carried on foot, motorcycle and bicycle. Simpson’s skill, enthusiasm and devotion to duty was recognised and rewarded.”

In 1917 Simpson was mentioned in dispatches from General Sir Douglas Haig, Commander-in-Chief of the British Armies in France for “distinguished and gallant services, and devotion to duty”.

Later in 1917, Simpson was awarded the Military Cross for gallantry and devotion to duty in the field. The citation from His Majesty The King reads:

“For conspicuous gallantry and devotion to duty. He organised the Brigade Signal Service so thoroughly that communication was maintained with every unit throughout. He was continually under shell-fire, but personally supervised all repairs, by his vigorous and cheerful manner impressed all ranks in the highest degree.”

But Simpson would not escape unscathed. He had been wounded twice, impacted by mustard gas and was eventually evacuated to a London hospital.

In November 1917, unlikely to return to the front, he requested Leave of Absence to complete his final course of lectures at the College of Pharmacy, due to start on the 1 February 1918. Leave was approved and he embarked from London in December 1917.

Simpson passed his final pharmaceutical examination on 12 June 1918 and registered as a Victorian pharmaceutical chemist on 10 July 1918, four months before the Armistice.

He opened Simpson’s Pharmacy in Brunswick and began a civilian career as a community pharmacist. In 1937 he founded the Allied Master Chemists of Australia Limited, better known as AMCAL, with D E Robertson and A E Moore. AMCAL grew to be Australia’s largest retail pharmacy group.

Simpson stayed in the Militia and moved from Infantry to Signals duties in the Australian Engineers. He was also moving up in the ranks. With the outbreak of the Second World War, he was appointed Australia’s first Chief Signals Officer.

He was promoted to Major General and expanded the Signals Corps to over 25,000 personnel to meet the demands of the war. He led the Signals efforts in the Asia-Pacific conflict until the conclusion of the war, despite being badly injured in an accident. He was appointed a Commander of the Order of the British Empire (CBE) following active service in the Middle East, Western Desert, Greece and Crete.

Simpson returned to retail pharmacy after WWII, operating a pharmacy in Prahran but his health continued to suffer from war service. In his later years, Simpson supported the establishment of Chemists Sub-Branch for ex-servicemen.

Simpson’s notable achievements also included the role in fundraising for the creation of the College of Pharmacy campus at Parkville. The War Memorial building is still in active use for pharmacy education even today.