Driving success: out of the car and into the pharmacy

The curtain has come down on the Victorian auto industry, but former workers are finding opportunities in the booming pharmaceuticals and medical technology sector.

Assad Ibrahim worked in car manufacturing for 12 years. He started at Ford in Melbourne, straight out of school when he was still a teenager, in the body shop, literally putting cars together.

“The exterior, the side assembly, the hood, the bonnet, the works,” he says. He did an apprenticeship for a trade in fitting and turning, and then also a diploma in engineering. He went on to work in project management at Ford, working with the newest manufacturing technology in a high-stakes, well-paid role.

Then the Australian automotive industry hit the skids. In Victoria, Toyota has now been reduced to a skeleton staff in Altona doing non-manufacturing roles. Ford stopped making cars in Victoria in 2016. Holden shut its last Australian plant, in Adelaide, last year. It had spanned nearly 100 years; the first Ford factory opened in Geelong in 1925.

The grand era was over.

“We all knew it was doom and gloom,” says Assad. “It was just a matter of when. It was heartbreaking. I put my heart and soul into the company and gave them so much. They gave me so much, too. But I knew I had to get out.”

Assad says he knew he needed to transition into another career, and boiled it down to three manufacturing industries in Melbourne – chemical, food and pharmaceutical. He didn’t know much about any of them, but by now he knew a lot about manufacturing. He decided on the pharmaceutical industry.

On 28 July, MMIC held a workshop where all stakeholders were updated and informed on the links between the auto industry and the pharmaceutical industry, with a view to attracting qualified former auto employees to fill the demand in the booming new sector.

Informed by the auto industry 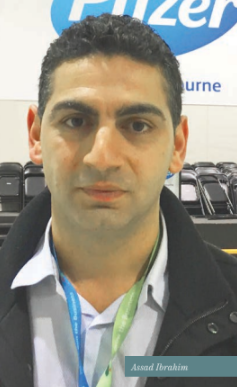 Assad took a job at Pfizer, with “a significant setup [with] a substantial manufacturing operation” in Melbourne. He’s been there 10 years now, one of six who have migrated from the auto industry. His role now is Packing and Technology Manager; he’s currently overseeing a packaging process idea potentially worth millions to the company.

Andrew Hodder, Pfizer’s Site Director at its Mulgrave manufacturing plant and an MMIC advisory board member, says his company, like others, always looks for ways to be more effective.

“We’re taking these colleagues from automotive into our environment and getting them trained up in the regulatory framework challenges and the way we do things. It helps us be more effective in the way we problem-solve and deal with the manufacturing line. We really take on board the things the auto industry has been very good at doing. We adopt them into our own manufacturing environment. They re- energise our existing workforce.”

Exports of pharmaceutical goods from Victoria rose nearly $1.5 billion last year, with the growth driven by blood products to the US and medicines to China. The state government has prioritised pharmaceutical and medical technology manufacturing as a ‘key priority growth’ sector.

“We’ve always supported ex-auto workers to find new jobs, and by teaming up with global companies like Pfizer and universities like Monash, we’re helping to create even more career pathways.”

Monash’s Pharmacy and Pharmaceutical Sciences Associate Professor Michelle McIntosh is the director of MMIC. She says tertiary-qualified staff in project management, design, quality control, engineering, business and science are wanted. She says the similarities between the two industries are “not a connection that may be obvious. But we are trying to draw that out, through MMIC, and shine a light on it. It’s very much part of our mandate to train and develop a workforce of the future.”

For Assad Ibrahim, managing major projects at Pfizer’s plant, the transition has been successful. “It was sad to see the auto industry go,” he says, “but the skills I got from it are incredible.”