With the centenary of the Armistice falling in 2018, the faculty felt it was appropriate to develop a program of remembrance.

In part, we wanted to acknowledge the sacrifices made by those pharmacists and pharmacy students. By telling their stories, we wanted to render them as something more than just names on an honour board – to rescue them from the dehumanising effect the passage of time can impose and acknowledge that these young men were once living, breathing human beings. They had ambitions, desires, complex internal lives and families they cared about. Many of their values are those that today animate the faculty and the profession.

We also wanted to trace the historical impact of their service. The consequences of the Great War were far-reaching and unpredictable, and the Australian pharmacy profession wasn’t immune, with everything from the contours of the role to the demographic makeup of the profession being affected.

This edition of Alchemy is just one of a number of ways in which we’re marking the centenary of the First World War.

Its companion piece will be a documentary by filmmaker Rob Sutherland, who previously produced documentaries of the Sissons Mural in Cossar Hall, and of the journey from college to faculty. There have also been a series of events.

On ANZAC Day earlier this year, a faculty delegation headed by Dean Bill Charman took part in the Dawn Service in London. At the cenotaph, Professor Charman laid a specially commissioned wreath made from the foliage of a Eucalyptus Kruseana, a species named after the foundation dean of the college, John Kruse. This was followed by a service at Westminster Abbey, attended by HRH Prince William and HRH Prince Harry.

The faculty also initiated an event to mark the centenary of the knighting of Sir John Monash.

Monash was made a Knight Commander of the Order of the Bath by King George V on 12 August 1918 at Château de Bertangles. This was the first time in 200 years that a British monarch had knighted commanders on the battlefield.

In 1963, Sir John’s daughter, Bertha, gifted a selection of her father's personal effects and artefacts, including the royal warrant signed by King George V and Sir John’s personal sword, to the University.

On 13 August this year, a private viewing of selected items from the historic collection was held for a small group that included the University’s President and Vice-Chancellor, Professor Margaret Gardner AO, former Victorian Premier Ted Baillieu and three of Sir John’s great-grandchildren. 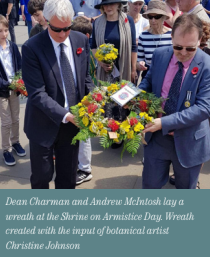 The Faculty of Pharmacy and Pharmaceutical Sciences has a special connection with Sir John: In 1927, he was the guest of honour at the College’s Prize Giving.

In his address, he made a number of comments that demonstrated his foresight, and prefigure some of the values that drive the University today. For example, he spoke of how essential original research is to providing professional education.

He also presented that year’s awards, including the first prize for the highest achieving student in the correspondence course. The winner that year was a student called Ernest Dunlop, better known as “Weary”.

Much like this issue of Alchemy, a significant portion of the centenary activities we undertake will revolve around the stories of the four men who were still enrolled as students when they were killed on service: Eric Bisset, Wallace Gordon Jewkes, Alan Couve and Malcolm Jones.

In September, Dean Charman travelled to Europe to visit the memorials to each of these four men, at which he laid wreaths that were handmade by staff and students. On Armistice Day, he led a delegation from the Faculty to attend the ceremony at the Shrine of Remembrance and lay a wreath.

And in 2019, we are planning further activities to ensure that our student-soldiers are appropriately commemorated.

To that end, we are wanting to contact their families – not an easy task as, being young men, none of our fallen students had direct descendants.

If you or anyone you know may have leads that could help us find out more about Eric Bisset, Gordon Jewkes, Alan Couve or Malcolm Jones, please email us at pharmacy.outreach@monash.edu