Seeds of success planted at Parkville 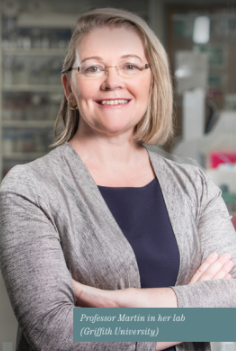 Pharmacy alumna Professor Jennifer Martin’s professional road has taken her from the Parkville campus all the way to the “wonderful, amazing honour” of being made a Companion of the Order of Australia.

Beginning her studies at the Victorian College of Pharmacy (now the Monash University Faculty of Pharmacy and Pharmaceutical Science) in 1979, she admits that pharmacy was not her first choice.

“I always wanted to be a vet,” she says. “And my second choice was medicine. But I didn’t score well enough at HSC to get into either of those courses. However, I was offered a place in pharmacy.”

She planned to transfer to veterinary science after first-year Pharmacy, but during physiology pracs she quickly discovered she didn’t have the stomach for surgery. Meanwhile, she fell in love with the pharmacy course and the college.

Professor Martin remembers a “great feeling of belonging” at the Parkville campus. “Everyone took the same course, the same subjects; the lecturers and prac staff were outstanding; it was great for me as a shy young girl from the sticks to go through the course as part of a cohort.” She thrived, loving the course and the content. “For me, the learning that the interaction between a small, specific chemical and a much larger biological molecule can result in pharmacological activity – and that the chemical (or drug) could be designed – was simply a revelation. That memory still gives me goosebumps all these years later.”

It helped that with a 90-minute commute home each day, she had plenty of time to study on the train. During her undergraduate studies she was awarded the faculty’s highest undergraduate honour – the coveted pharmacy gold medal.

Professor Martin was made a Companion of the Order of Australia in the 2018 Australia Day Honours for her eminent service to scientific research, particularly in the field of biochemistry and protein crystallography applied to drug-resistant bacteria, and as a role model and an advocate for gender equality in science. She can trace those areas of interest back to her time at VCP. 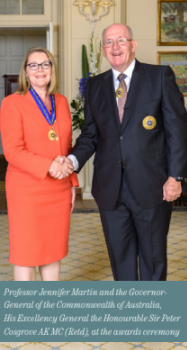 Early on, she found an inspirational leader in Professor Peter Andrews AO, who she says “didn’t have that unconscious bias present in so many of us that tends to favour men over women; he gave opportunities and recognition to everyone that contributed and always had very balanced teams.” Professor Andrews and the then Dean of the College Professor Geoff Vaughan AO would go on to be lifelong mentors, helping spark her interest in leadership and role models. Sadly Geoff passed away this year, just days before the 2018 Order of Australia was announced.

“I didn’t know it at the time but Peter and Geoff became constants in my life, and their leadership style helped define my own,” says Professor Martin.

Now Director of the Griffith Institute for Drug Discovery at Griffith University, Professor Martin’s work aims to bring government, industry, philanthropists and academia together to address the world’s most devastating diseases. Her own research focuses on antibiotic resistance, which she says is a global public health problem.

Now coming back full circle, she collaborates as part of a national team with researchers at MIPS to design and develop drugs to overcome antibiotic resistance by “disarming rather than destroying” pathogenic bacteria.