Established to support female pharmacy students from rural and remote areas of Victoria and Australia, this bursary honours Swedish pharmacist Thea Pärnamäe, a great believer in the value of using education and pharmacy to improve lives.

The bursary pays $1200 for one year to a female undergraduate student from a rural or remote area.

Thea's niece, Dr Kersti Nogeste, has generously funded the bursary to honour her aunt's extraordinary life and their shared belief in the value of tertiary education and giving back to the community.

"Although Thea lived in Sweden, I shared a close bond with her and fondly remember her commitment to her profession," Dr Nogeste says. "Thea was keenly interested in the pursuit of education, since her own studies had been interrupted by World War II. Also, as she had grown up in a rural area during  a tumultuous time, she experienced, first-hand, the particular difficulties that rural students face in furthering their education."

Dr Nogeste remembers receiving personally addressed mail from her aunt as a child, and the pair corresponded regularly over decades until weeks before her aunt's death in late 2010.

While not a pharmacy graduate, Dr Nogeste felt that a bursary to support female students from isolated areas was the best way to honour her aunt's life, values and influence on her.

"She taught me the value of generosity of spirit and the importance of keeping in touch," Dr Nogeste says.

Thea Pärnamäe was born in rural Estonia in January 1927 but fled to Sweden in 1944 as a World War II refugee with her parents and two sisters. After finishing secondary school, she worked for the Swedish post office before enrolling in the Farmaceutiska Institutet in Stockholm.

Dr Nogeste says her aunt chose a career in pharmacy because it promised to benefit her and society. A dedicated pharmacist, she saw her role as not only dispensing drugs but also ensuring the overall health and wellbeing of her clients.

Find out about applying for the Thea Pärnamäe Rural Pharmacy Bursary. 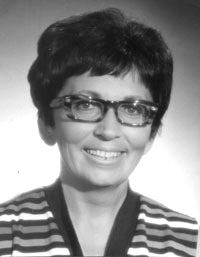