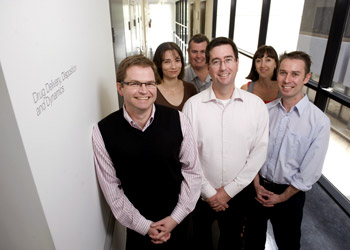 Our researchers, in collaboration with the biotechnology company Starpharma Holdings Ltd (ASX:SPL), have developed a new drug delivery method that could benefit thousands of patients worldwide with particular types of cancer, HIV and lymphatic conditions.

The Melbourne-based research team has shown how PEGylated polylysine dendrimers, a new type of nanosized drug delivery system, can be altered to target either the lymphatic system or the bloodstream.

Lead researcher at the Monash Institute of Pharmaceutical Sciences and Associate Dean of Research, Professor Chris Porter, said the   discovery has particular implications for the treatment of diseases that are spread via thelymphatics and lymph nodes.

"We are excited by the possibilities that this technology may result the improved treatment of particular types of diseases, including metastatic cancer, lymphoma, HIV and metastitial tuberculosis," Professor Porter said.

Dendrimers are precisely defined, synthetic nanomaterials of approximately five to 10 nanometres in diameter. They consist of layers of polymer surrounding a central core.

The dendrimer surface contains many different sites to which drugs may be attached as well as attachment sites for materials such as polyethylene glycol (PEG), which can be used to modify the way the dendrimer interacts with the body.

PEG can be attached to the dendrimer to 'disguise' it and prevent the body's defence mechanisms detecting it, slowing the breakdown process. This allows the delivery system to circulate in the body for an extended period, maximising opportunities for the drug to reach the relevant sites.

Professor Porter's group and Starpharma have been investigating dendrimer-based drug delivery systems for some time, but these most recent findings appear to hold particular promise.

The data, published in the Journal of Controlled Release, demonstrate that increasing the chain length of attached PEG chains to increase dendrimer size can achieve a dramatic rise in absorption efficiency and transport into the lymphatic system after subcutaneous injection. Conversely, a shorter PEG chain led to rapid  absorption into the blood.

"Our work suggests that careful design of the size and surface characteristics of PEGylated polylysine dendrimers provides an opportunity to choose whether these delivery systems are absorbed and distributed via the bloodstream or the lymphatic system," Professor Porter said.

"The ability to target therapeutic treatments in this way offers the potential to maximise drug concentrations at sites of action within the lymphatic system – and importantly to minimise concentrations elsewhere, potentially reducing side effects and toxicity. It's still early days, but we're  confident the potential for improved patient treatment is significant."