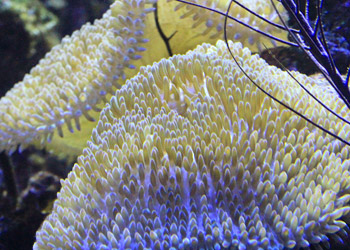 Research that began more than a decade ago into a toxin found in the flower-like tentacles of a Caribbean sea anemone has led to clinical trials of a promising multiple sclerosis treatment, thanks to the persistence of Monash researcher Professor Ray Norton and his US collaborators.

Professor Norton's efforts epitomise the Monash Institute of Pharmaceutical Sciences' (MIPS) philosophy of better drugs by design. His work here, supported by a five-year US National Institutes of Health grant, is helping turn the toxin into a safe medicine for one of the world's most debilitating diseases.

The drug, based on a peptide known as ShK toxin, blocks a specific channel in certain white blood cells that contribute to the pathology of MS and other immune system diseases, such as rheumatoid arthritis. It entered phase-one clinical trials in 2012.

In the mid-1990s, Professor Norton and his team determined the structure of ShK toxin at the then Biomolecular Research Institute, near Monash's Parkville campus, where MIPS is based.

At the same time, working independently in the US, Professor George Chandy discovered the dependence of autoimmune diseases like MS on the voltage-gated potassium channel Kv1.3, found in T-cell white blood cells. This channel basically controls the membrane potential (voltage) in this class of T cells.

Recognising the significance of their work, the two scientists began collaborating to develop medicines for a range of autoimmune diseases, beginning with MS.

Potassium channels control many key functions in our bodies, including heartbeat and hormone discharge. But developing a drug that targets only Kv1.3 potassium channels might have been impossible if they weren't found only in T-cells and the nose in humans. Such limited distribution made a highly selective  immune suppressant possible.

Professors Norton and Chandy, with colleagues Dr Mike Pennington and Assistant Professor Christine Beeton, have developed a chemically modified derivative of the sea anemone peptide that acts only on the Kv1.3 channel.

"Even though this treatment is an immunosuppressant, one of its advantages is that it doesn't shut down the whole immune system," Professor Norton said. "It's very selective."

But the team still has to overcome high production costs and potential side effects from the presence of non-protein amino acids in current analogues (synthesised copies) of the toxin.

Synthesising and chemically modifying the toxin is expensive and has involved the use of modified amino acids that the immune system might react against if recognised as foreign.

The phase one trials – essentially the proof of concept stage – are a chance to work on producing safer and cheaper analogues, using protein amino acids.

"The National Institutes of Health grant will enable us to make variations of this peptide that are based entirely on protein amino acids," Professor Norton said. "They can be produced by expression in bacteria, making them much cheaper to produce than synthetic peptides.

"We already have some ShK analogues that are moving forward, but we think that there is an opportunity to make better ones, and I guess the National Institutes of Health agree with us."

The team is also exploring opportunities that draw on other areas of expertise within MIPS to improve future versions of the drug.

Find out more about peptide research at MIPS.