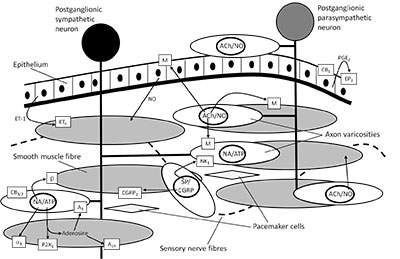 Likely locations on various cell types of membrane bound receptors and extracellular messengers which play a role in the control of prostatic smooth muscle contractility.

Our research focuses on three interrelated receptor proteins that are the predominant mediators of smooth muscle contractility in male genitourinary tissues: the G protein-coupled α1A-adrenoceptor and M3 muscarinic receptors as well as the P2X1-purinoceptor ligand gated ion channel. Using pharmacological, biochemical, immunohistochemical and genetic approaches, we can study the role played by these receptors in male genitourinary function.

Inhibition of vas deferens contraction as a male contraceptive target 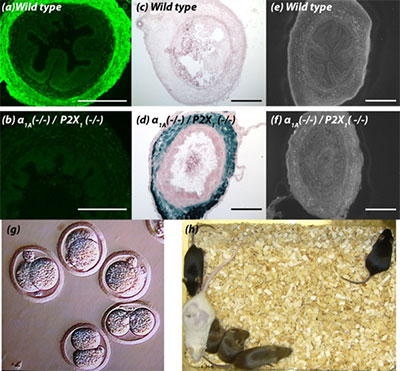 The search for a viable male contraceptive target has been a medical challenge for many years. Most strategies have focused on hormonal or germline strategies to produce dysfunctional sperm that are incapable of fertilization. The problem with such approaches is that they have intolerable side effects such as affecting male sexual activity or causing long term irreversible effects on fertility. In addition, some strategies may transmit detrimental changes to future offspring. This project investigates a male contraceptive target within the autonomic nervous system, which would not affect the long term viability of sperm nor the sexual or general health of males. In addition, due to the nature of the target, the contraceptive has the potential to be orally administered. This project uses genetically modified mice to investigate the viability of this target using behavioural mating studies, isolated tissue experiments, sperm analysis, in vitro fertilization, immunohistochemistry and in vivo cardiovascular physiology experiments. 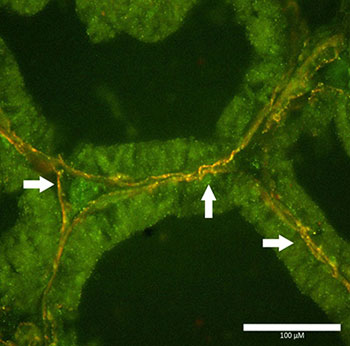 Colocalization of CXCR2 and α-actin within the stroma or the rat prostate gland.

Control of smooth muscle contractility within the prostate gland 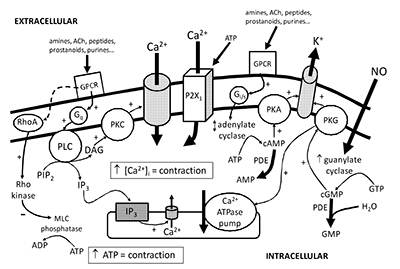 Benign prostatic hyperplasia (BPH) is the major cause of lower urinary tract symptoms in men aged 50 or older. Symptoms are not normally life threatening, but often drastically affect quality of life. Current drugs are only effective in treating mild to moderate symptoms, yet despite this no emerging contenders appear to be on the horizon. This is remarkable given the increasing number of patients with severe symptoms who are required to undergo invasive and unpleasant surgery. This project investigates novel drug targets focusing on drug targets which are able to relax prostatic smooth muscle in a similar way to the α1-adrenoceptor antagonists as this appears to be the most effective mechanism of action for the treatment of urinary symptoms associated with BPH. Recent basic research in our laboratory has revealed a number of novel drug targets such as muscarinic receptor or P2X-purinoceptor antagonists which have the potential to produce more effective and safer drug treatments. 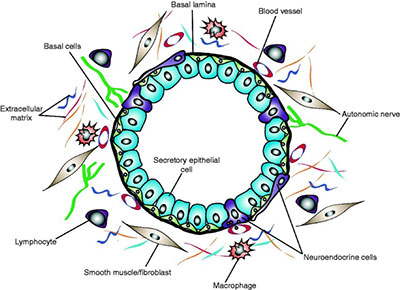 Cellular components of the prostate gland which make up the tumour microenvironment in prostate cancer (from Barron & Rowley, Endocrine-Related Cancer 2012; 19:R187–R204.

Our hypothesis is that G protein-coupled receptors (GPCRs), exemplified by the β2-adrenoceptor, the α1A-adrenoceptor and the M3 muscarinic acetylcholine receptor, activate signalling pathways that promote the progression and metastasis of prostate cancer. The significance of receptor-signalling systems is two-fold, (i) examining GPCR responses to endogenous hormones or neurotransmitters may provide us with novel insights into cancer progression or metastasis, and (ii) agonists or antagonists at key receptors may provide new avenues for cancer treatment, either as single agents or in combination with signalling pathway inhibitors. Our studies utilise an integrated approach incorporating cell based assays and in vivo mouse models that will provide multiple lines of evidence about which receptors and pathways are important in mediating the effects of endogenous agonists or therapeutic ligands on disease progression.

CHAKRABARTY B., DEY A., LAM M., VENTURA S. & EXINTARIS B. Tamsulosin modulates, but does not abolish the spontaneous activity in the guinea-pig prostate gland. Neurourology and Urodynamics 2015; 34: 482-488.

WHITE C.W., SHORT J.L., HAYNES J.M., EVANS R.J. & VENTURA S. The residual nonadrenergic contractile response to nerve stimulation of the mouse prostate is mediated by acetylcholine but not ATP in a comparison with the mouse vas deferens. Journal of Pharmacology and Experimental Therapeutics 2010; 335: 489-496.

GRAY K.T., SHORT J.L. & VENTURA S. The α1A-adrenoceptor gene is required for the α1L-adrenoceptor-mediated response in isolated preparations of the mouse prostate. British Journal of Pharmacology 2008; 155: 103-109. recommended by Faculty 1000 Biology

VENTURA  S. & EVANS B.A. Does the autonomic nervous system contribute to the initiation and progression of prostate cancer? Asian Journal of Andrology 2013; 15(6):715-716.

Chakrabarty B, Dey A, Lam M, Ventura S, Exintaris B (2014) Tamsulosin modulates, but does not abolish the spontaneous activity in the guinea pig prostate gland.  Neurourol Urodyn. 34(5):482-488.

Control of smooth muscle contractility in the prostate gland