Our patrons advocate for the education and research that take place at our centre. They help bring attention to our activities in the Australian community and contribute to expanding our networks in Italy. We are honoured to have two highly distinguished patrons, the Honourable Sir James Gobbo AC CVO and Carla Zampatti AC. 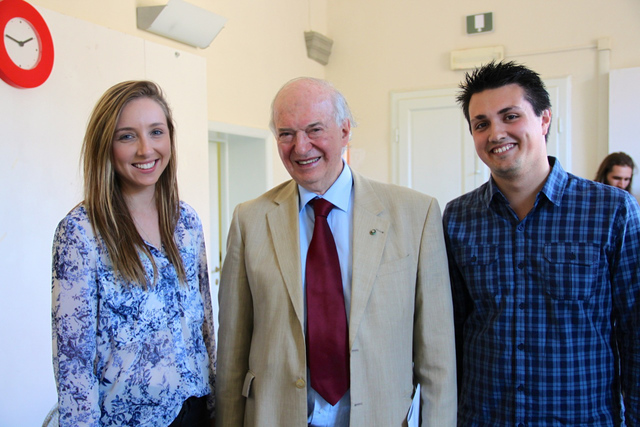 Sir James Gobbo was instrumental in securing the support of the Italian Australian Foundation to offer travel grants for Monash students of Italian descent to study at our centre.

The child of Italian migrants to Melbourne, Sir James studied law and he was appointed to the Supreme Court in 1978. Sir James has been involved in a wide variety of community activities and he was honoured by Her Majesty The Queen with a Knighthood in 1982 for these services.

He has been active in the area of immigration reform and multicultural policy in Australia. Sir James is Emeritus President of CO.AS.IT, a non-profit organisation for Italians and Australians of Italian descent.

Sir James served as Governor of Victoria from 1997 until 2000. He was conferred the Order of the Grand Cross of Merit of the Republic of Italy in 1998. Sir James was conferred a Doctor of Laws by Monash University in April 1995.

Sir James is our foundation patron. His autobiography Something to Declare: A Memoir was published in 2010.

A leading Australian fashion designer and business person, Carla Zampatti has been a patron of our centre since 2012. Of her association with Monash University she says “It is particularly special being involved with the centre in Prato – the creative heart of textiles where the most beautiful and original ideas have come from”.

Carla Zampatti, who emigrated to Australia from Italy when she was nine years old, has built one of the country's foremost design houses. For her leadership in business and design, she has been honoured with the Australian Fashion Laureate and named a Companion of the Order of Australia and Commander in the Order of Merit of the Italian Republic.

For her contributions to fashion and business, as well as for being a role model for women, Carla Zampatti was conferred the Doctor of Laws honoris causa by Monash University in May 2014.

Carla Zampatti serves on the boards of the European Australian Business Council and the Sydney Dance Company. She is a member of the Australian Multicultural Foundation, and she also supports the Museum of Contemporary Art Australia Foundation.