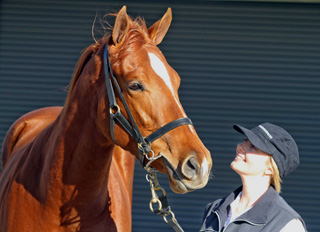 Shona Drechsler grew up on a farm outside Bendigo to a family of hard workers. In her words: “Unless you were on your death bed, you worked!”

She got a job managing a video store, which she enjoyed, as soon as she finished year 12.  It was the first in a string of roles in the retail industry, often in managerial positions.

But Drechsler says she had “horses in her blood”. She completed a diploma in horse breeding at TAFE and won a scholarship to the highly regarded Cambridge Stud in New Zealand, an immaculate establishment where every piece of manure was vacuumed off the ground. She’s since worked as a strapper and trainer of racehorses.

Dreschler says she became fascinated with physiology while caring for animals in a veterinary practice. She’d always been interested in science. She realised then that “you needed a tertiary degree to get ahead”, something her mother had urged her to do.

Studying at university was a daunting prospect but a bridging course in science at a TAFE helped. Even so, she recalls , “going home crying that I couldn’t do fractions!”

A determined Drechsler  enrolled in science at Monash at the age of 31, graduating in 2011 with a major in physiology and minors in microbiology and pharmacology. Her mother was thrilled.

“I’m so glad I did it. It was a massive achievement for me, being a mature age student and always being the oldest in the class. I’d have no hesitation in recommending someone to do it. Having a science degree packs a big punch.”

She looked into jobs at several research institutions but was disappointed to find how little they paid.

Meanwhile, horses continued to beckon.  She worked at International Racing Transport, which imports and exports horses around the world and extended her equine knowledge.

Since February, Dreschler has worked as the Racing and Operations Manager of BC3 Thoroughbreds, which buys, sells and trains racehorses.  BC3 purchased some of the racing industry’s star attractions – Black Caviar’s half-sister was purchased for $2.6 million, and her half-brother for $5 million.

Drechsler co-ordinates the movement of the centre’s 35 horses, liaising between owners, trainers, vets and racing officials.

She says understanding physiology is a help when explaining an animal’s injury to owners who have little knowledge of horses.

She continues to be fascinated by science, reads medical and science journals, re-reads her textbooks and watches science shows on TV. The idea of working in a science-based area of horse physiology still appeals.

Name: Shona Drechsler
Course: BSc: physiology major
Year of graduation: 2011
Job: Racing and Operations Manager BC3 Thoroughbreds
Career: racing industry
Science: “Science teaches you that you should look at something and ask how and why.”