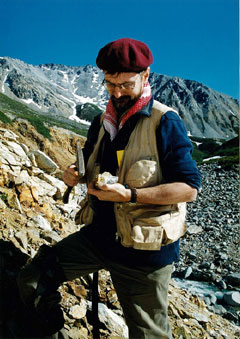 Dave Andrews has mining in his blood – generations of it dating back to Welsh miners in the 1800s. But it was a Monash University lecturer who nudged him into his first job as a geologist with Rio Tinto.

Dave, born in Broken Hill, knew he wanted to be a geologist from an early age. As an honours student he resisted the idea of working for the same company as his father, a metallurgist, until a lecturer persuaded him to attend a CRA (to become Rio Tinto) recruitment session. The recruiter mentioned a  job    working    on    the    Saudi  Arabia-Yemen  border  and  he  was  hooked. “I said, ‘Yes, I’m up for that!’”

Dave has worked for Rio Tinto in technical, managerial and commercial roles in 36 countries since then at often exciting times in history. He was part of the diamond rush in the late seventies in the Kimberley region, Western Australia, and saw apartheid first hand visiting South Africa. He witnessed  the    last    days    of    the  USSR  in  the  early  nineties  when he was the manager responsible for exploration in Far East Russia.

He is now chief geologist with Rio Tinto, based in Melbourne.

“I think I’ve probably got the best job in the company – I enjoy it and it’s still a challenge,” he said.

He devotes his time outside work and the travel it involves, to his family.

“You have to be prepared to travel and to relocate your family,” he advises anyone contemplating a career in the mining and extraction sector. "Get some vocational experience. Make sure you complete an honours degree and if you want to get into exploration get some experience first before  doing    a    PhD    -    that  gives  you  a  clearer  picture  of what you want to do." (Dave completed an MSc in mineral exploration at the Imperial College, University of London, in 1984 after experience in the industry. He says that one of the strong points of his Monash honours degree course was the fieldwork it  involved.)

Another piece of advice is that mining is cyclical so treat it as a career rather than a job.

As an alumnus, Dave is helping a future generation of miners by contributing his thoughts on what a geoscience course should offer and providing links with others in the industry.