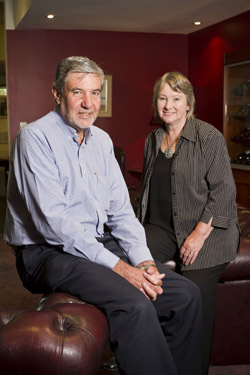 Since his days studying chemistry in  the 60s, Monash has played base camp in the life of alumnus Dr John Parrott. He  played cricket here for two decades, married his wife Mary at the Monash  Chapel, and has hosted family occasions at the Staff Club. “I hope I’ll  be  allowed to have my funeral at Monash,” he quips.

Since graduating, John  has enjoyed a satisfying career in the field of resources and energy. For 20 years, he was an executive at BHP Billiton, and it was during this time that he chaired a Victorian government sub-committee on minerals and energy.  He championed research on ceramic  or  solid  oxide fuel cells performed in Australia by CSIRO. “Ceramic fuel cells are the  most efficient way we know to generate electricity.”

His far-sightedness in support  of the technology resulted in him taking the job as CEO of start-up company Ceramic Fuel Cells Ltd in March 1993, where he helped commercialise this new form of sustainable energy production.

Dr Parrott’s experience as a research chemist had given him great exposure to the tenacity required in making a new discovery. John and his family understand what it takes to develop research science. That’s why they are avid supporters of Monash University and they donate to the Faculty  of  Science to help future generations of students. John and Mary Parrott donate towards student scholarships and have committed a bequest to science seeking to build a sustainable base of support for students. John also works as a champion helping  bring his network together to support science  at  Monash.

Dr Parrott says, “My years doing my PhD were some of the best years of my life. Chemistry is a science that explains the fundamentals of the planet. It’s astounding how many  advances through science the world has made in the last 100 years – for example, in the fields of  transport,  communications and entertainment.”