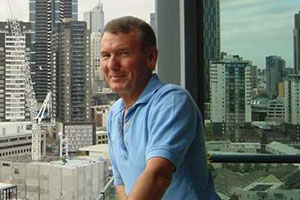 Dr Ray Shaw’s rise through the ranks of US technological giant, Varian, began with a  love of building scientific instruments as an undergraduate at Monash  University.

Dr Shaw started university in 1967, unaware  of where the chemistry and physics he was studying would take him. It was an  exciting time at Monash, he recalled, with the days of the Vietnam War and  demonstrations on campus.

After finishing his PhD in spectroscopy Dr Shaw stayed on as a senior  teaching fellow – spending nearly a decade at the university altogether –  before being offered a position as a senior scientist in the Melbourne arm of  Varian, which manufactured scientific  instruments.

“I’d spent a lot of time designing my own instruments to do  experiments at Monash,” Dr Shaw said. “Although I originally contemplated  remaining in academia.”

He accepted the challenge.

Within a few years of starting at Varian he was appointed the  company’s research and technology manager, reporting to the general manager.

“Here I was learning about financial management, marketing, people  management; all those sorts of non-science things!”
Dr Shaw left Australia in his mid-30s to run a small company Varian  had acquired in California. It was a “great experience” for him, completing the  transition from being a technical manager to a business one. Two years  later, in 1987, he was heading  Varian’s Nuclear Magnetic Resonance division in  Silicon Valley, a $200 million outfit recognised globally for its work  developing magnetic resonance  equipment,  including pioneering work in MRI. Additionally, he was ultimately responsible  for  all of Varian’s worldwide facilities, information systems and activities in  Asia and Latin America.

They were heady times.

“I was meeting lots of people in the well-known big Silicon Valley  companies, travelling round the world visiting major universities and talking  to other scientists, including Nobel Prize winners who were using our equipment. But there  was a lot of pressure.”

Dr Shaw returned to Australia in 2001 to retire. “I often miss the  stimulation of that work – but certainly not the stress!”

Until recently he has chaired the board of Rectifier Technologies, and  a small vineyard/wine company. A keen sailor, he is involved  in managing the sport in Victoria and regularly competes in ocean-going races.

Dr Shaw is looking forward to sharing the commercial knowledge he has  gained with those at Monash – insights that weren’t available in his  undergraduate years. Until then, his advice to students: “You’ve got to be prepared to  take a risk.”