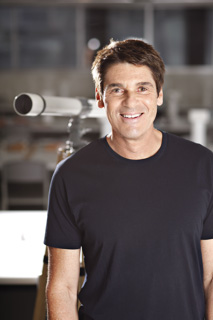 Catalyst host Graham Phillips' urge to convey his excitement about science goes back to his days as an eight-year-old boy when he showed people the chemistry lab he'd assembled under a table in the family garage.

Phillips ordered his own chemicals from a local company, Selby's, and mixed them in test-tube racks using a small book on experiments.

He was thrilled to be able to show off his lab to an inspiring friend of the family, John Parrott, then a PhD student at Monash and later an executive at BHP. Another boyhood highlight involved setting alight the hessian screen to his lab. The idea was to test some old water-filled fire extinguishers he and a friend had found at the tip. Fortunately, they worked.

Phillips' passion for science took him through Monash and a PhD in applied maths and astrophysics, which explored the role of magnetic fields in the formation of stars, and then on to research at the CSIRO. But he realised that what he really wanted was to communicate scientific work.

"I always enjoyed talking to people about my research and explaining scientific stuff – it's about having people understand the thrill of it," he says. "And getting to delve into all these areas of science."

Phillips starting writing for various newspapers (which he still does) including publications with a broad readership such as The Sunday Telegraph. He describes this as "bringing science to the masses".

This meant learning to balance scientific content and accuracy with the need to make the material easy to understand and relevant to a general audience.

He moved into television after a guest appearance on Midday with Ray Martin when he explained the science involved in fire-walking by doing a live demonstration in the studio. He joined that show regularly, and then worked on Quantum, Hot Chips (which reported on the arrival of the worldwide web), and Catalyst on the ABC, with a two-year stint on Beyond Tomorrow on Channel 7. Catalyst

He was a presenter on Catalyst when the program was launched in 2001, and is now its host and a reporter/producer.

"There's always something new," he says of the program. "That's what keeps me going."

Particularly memorable over the years have been the episodes airing ideas that seemed like "crazy talk" at the time – such as brain implants that read thoughts – and which are reality now.