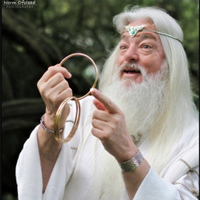 Meet scientist-magician Kim Silverman. Kim who graduated from Monash in 1977 and went on to compete a PhD at Cambridge, observed that “good magic” engages the part of the mind that’s about conscious thought and conscious reasoning.

“Magic’s not about letting go of your beliefs, it’s all about clinging to them and reasoning them out,” said Kim.

Kim works as a principle research scientist at Apple in Silicon Valley, California, performing as a magician in his spare time. As a child, his parents nurtured both his love of magic and of science. Kim performed his first tricks at his eighth birthday party using a magic set they had given him. The tricks didn’t work: it was a disaster. Kim persevered.

He let go of magic for a while when he went to university, studying science – maths, biology, physiology and computer science – and majoring in psychology.

“The quality of teaching and the rigorousness of thinking that Monash encouraged was as high as any I’ve seen in any university in the world,” said Kim.

“If I hadn’t done psychology at Monash I wouldn’t have understood the importance of cognitive behaviour and understood how the brain works and how magic could affect that.”

Having appeared on several TEDx talks on his approach to magic performances, Kim said, “Magic teaches us about deception, that things are not always as they seem, and to question what we believe, including assumptions we hold about ourselves.”