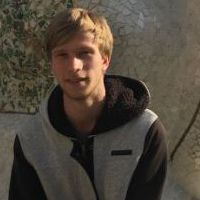 Why did you decide to study Science?

What made you choose Monash University in particular?

I picked Monash for heaps of reasons; all my friends were planning on going, there’s a bus right outside my house that goes straight to Monash that’s super convenient, they offer double degrees, it’s ranked quite high but isn’t as pretentious as a certain other G08 university found in the centre of Melbourne and I also really loved the vibe I got from it on open days.

What is your favourite aspect of studying science?

The fact that I can start on my major in first year, and almost exclusively study units relating to it in second year

What do you plan to do when you graduate?

If you were talking to a VCE student who wanted to study science but wasn’t sure which uni to pick, what would you tell them about Monash?

Monash has almost any double degree you can think of so if pure science isn’t your thing, you always have the possibility to mix it with something else. It’s also right in the heart of a large industry hub so finding placements and internships at Monash is a lot easier than at other universities.  A lot of the science facilities are also almost brand new so you know you’re going to get a top rate experience

What has been the highlight of your science degree so far?

Having my multivariable calculus tutor host a maths morning tea in the maths building and spend an hour ranting about everything from how long uni degrees in the US take to how stupid other sciences are, all while enjoying free food.

My favourite teacher would be Stephen King, who I had for Principles of Microeconomics last year. He always explained things in a way that was relevant and entertaining, including explaining the economics of tinder. He also wore a suit and sandals to every lecture that never failed to amuse me.

What was the biggest misconception you had about studying science before you started your course?

I actually thought there’d be way more work than there ended up being. Everything’s much more relaxed than I anticipated, which has been a pleasant surprise. However, the nature of university and how, for the most part, the people you meet in one unit you don’t see in the other 3 and you typically lose touch after the unit is over was also really different to my expectations.

Are you involved in any extra-curricular activities? What have you gained from these activities?

Right now, I’m pretty involved in the MSA, which has been amazing for meeting heaps of amazing new people. I’m also on the committee of the ALP club where I’ve learned a lot of new organisational skills. Lastly, I’m a part of the Access Monash mentoring program, which has been really rewarding in terms of helping disadvantaged people get the very best out of their education.

Why did you become a Monash Science Ambassador?

It aligns with a lot of the reasons I decided to apply for Access Monash, as they both share very similar missions. In some respects, it’s actually better than Access Monash since it aligns much closer to my degree!

A piece of advice I live by/Lifehack:

Experiences count way more than grades, take every opportunity you can. Also, networking is insanely important.

I’m currently listening to/watching…. I just finished rewatching every season of Parks and Rec in the last two weeks, which is a bit intense. While writing this document I was listening to; Broods, Rogue Wave, Tame Impala, GRiZ, Nirvana and the classic Mr Brightside – the killers