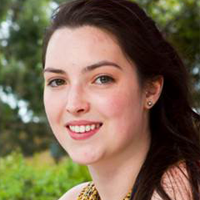 Growing up in South East Asia, Lucinda realised that her strong skills in English, biology, French and history lent themselves well to a degree that would combine science with communication.

"Science was always what I was interested in as a child," she says.

"When I was little I thought science meant people working in a lab, and that really excited me, although science is actually so much more than that. My father is originally a plant geneticist so I grow up with parents interested in science, reading science magazines and giving me bug catchers for my birthday instead of dolls. The great thing about science that I have realised since coming to Monash is how broad it is- you can be science communicator, you can do business, you can just consult for people; there are so many different types of science.

"I never had a clue of what I want to be. Now, having done law and science, I am interested in scientific patenting or combining science with communications or journalism. Having the freedom to try out so many different things has been great."