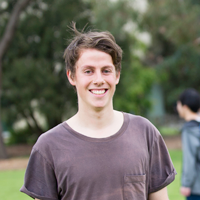 Oliver's focus on travel and community engagement has driven him to lead a variety of philanthropic activities in Australia and internationally.

"In 2012 I went on an inter-campus exchange to Monash University in South Africa and I got involved with a project aimed at sourcing books for children at a local primary school in Zandspruit, Johannesburg, " Oliver said.

"Another Monash student and I organised a range of fundraising activities including movie nights and trivia; we organised and ran everything ourselves and it was very rewarding knowing we were making a difference. When the library opened it was just so amazing to see all those kids at their school with resources that none of them have ever had. For a lot of people, books don't mean much, but over there they mean so much. So that was really cool, just knowing that you were doing something that would help these kids, even if it was just something small."

"I always wanted to go to Africa and Monash made it so easy. The study abroad opportunities were a big part of the reason I decided to come to Monash. Having the campuses overseas and the partner universities has made the process of an exchange very easy," he said.

"I started doing science because I wanted to do physiotherapy, but studying geology has totally changed me. Since starting my degree I've discovered my interest in natural disasters and it has really driven my direction. My dream in the future is to work in disaster management and find a way to combine my love of science with my passion for helping people. "