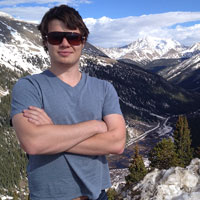 Tasman Powis studied a double degree in Aerospace Engineering and Science from 2009-2014, with majors in Physics, Mathematics and Aerospace Engineering. During his degree he had the opportunity to undertake cutting-edge research in cold atom physics under the supervision of Dr Tapio Simula and with fellow Honours student Steven Sammut in the School of Physics. The research was published in one of the world's most prestigious Physics journals, Physical Review Letters (PRL) and attracted media attention.

After receiving offers from a number of world-leading universities, Tasman will later this year be starting a PhD at Ivy League University, Princeton, where he will be working on plasma physics, in particular with applications to electric propulsion for spacecraft and fusion power plants for use on Earth and in space.

"One of the main reasons that I chose to study at Monash was because it gave me the option to study a double degree. I knew that this would provide me with a deeper understanding of mathematics and physics to complement my engineering degree.

"I have also always fostered a fascination with the strange and wonderful physics of quantum mechanics and Einstein's relativity. Studying Science at Monash allowed me to pursue these interests alongside engineering, in one of Australia's most reputable science faculties.

"One of the greatest experiences I had at Monash was the opportunity to work on cutting-edge research in cold atom physics with my colleague Steven Sammut and under the supervision of Dr. Tapio Simula. Through a lot of hard work and Dr. Simula's mentorship we were able to publish a paper on our findings in one of the world's most prestigious physics journals (Physical Review Letters). Not only was it incredibly exciting to discover something that no one had ever seen before, but I believe that this publication is one of the main influencing factors for my acceptance into a PhD program at Princeton. When applying for a PhD most universities want to know if you have the skills to write and publish your notable work. Fortunately, graduating from Monash I already had that experience. Not only did this make me desirable to other universities but provided me with the best kind of preparation for my PhD."