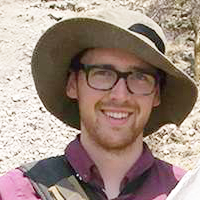 But this is exactly where Tim found himself when he was invited by palaeontologist and Monash science lecturer Jeffrey Stilwell to accompany him on a research expedition to Tanzania.

Stilwell and a colleague used the trip to delve deeper into ancient ecosystems and environments as part of an oil and gas exploration project for a Shell International ARC Linkage project. By understanding the geological processes that have created the petroleum-rich area in Brazil, they hope to project future petroleum development.

"Having the opportunity to fly over African plains dotted with volcanoes and watch MGEating herds in safari parks was definitely not what I expected when I enrolled in this course," Tim said.

"We looked down at our feet and it was like nothing I have ever seen before. It was a pavement of fossils – and these were big animals. I was picking up things like huge canine teeth from a hippopotamus, or the limb bones from extinct megafauna that weighed thousands of kilograms."

Tim said the experience had broadened his appreciation of value of integrating different fields of science.

"I love the creativity and open process that science as a discipline invites and enables," he said.

Get to know more about this course here.