A structural issue: breaking down glass to make it stronger For most of us, a glass of water doesn’t appear to be an unfathomable mystery, but for Monash materials scientist Amelia Liu, it represents one of the “grand challenges” of physics.

Since the days of ancient Egypt, humans have made silica glasses by melting sand, blowing it into different shapes and then allowing it to cool and solidify. Glasses have many unique engineering properties – they’re shiny, formable, strong, tough and sometimes transparent.

“Usually, when you cool something down from a melt, it will turn into a crystal. A crystal is a structure where the atoms all line up in rows, like soldiers,” Dr Liu says. “But – if you cool them down quickly enough – the atoms don’t have time to find this ordered structure, and so what you get is a solid that still has a similar structure to the liquid that came before it.”

This is what glass does. It’s known as a disordered solid, because the atoms are arranged haphazardly, as they are in liquids. “Why glass is a solid at all is perplexing to scientists,” she says. “Its structure doesn’t change that much as it solidifies,” she explains. “The atoms get closer together, but do not become obviously more ordered.”

Dr Liu works in the Monash School of Physics and Astronomy. Previously, she was an instrument manager at the Monash Centre for Electron Microscopy. The centre was purpose-designed a decade ago to house the nation’s first double aberration-corrected transmission electron microscope. In these sophisticated instruments, a beam of electrons is transmitted through a specimen to form an extremely high-resolution image. These instruments can resolve features down to the atomic scale, 1000 times smaller than can be seen with a conventional light microscope.

Dr Liu has received an Australian Research Council Future Fellowship to pursue her research into the atomic structure of different types of glasses. Her purpose is two-fold: the first is to see if she can establish a link between the atomic structure of a glass and its physical properties; the second is to see if it’s possible to design a type of glass that’s less brittle. 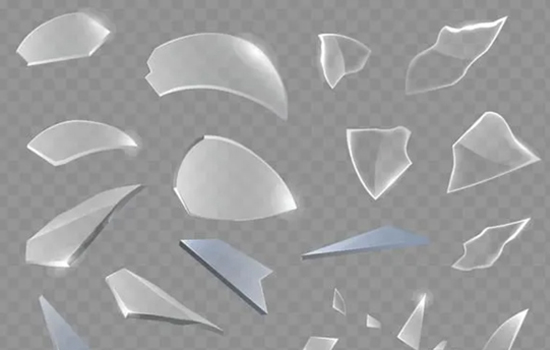 “My research is really about achieving a better understanding of the structure of glasses,” she says. “By developing new approaches to measurement and modelling we hope to understand, at a fundamental level, why the brittle failure of glasses occurs.”

Many types of glass are already in daily use – the thin, tempered glass on our mobile phones, the safety glass on car windshields, heat-resistant glass for cookware, and so on. Although engineers are skilled at manipulating glass for use in a variety of applications, we still have little understanding of glass at a molecular level, Dr Liu notes.

“I want to look at a large number of glasses, and characterise their structure, and understand how the atomic structure is connected to their properties,” she says.

“I have started doing that, but only for ideal systems made in the laboratory. I’d like to broaden my research to examine more complex industrial formulations and engage more strongly with industry.”

“Why glass is a solid at all is perplexing to scientists.”

“When people solve a crystal structure, they figure out where every single atom is. They can do this because the crystal has a periodically repeating structure – the unit cell. This unit cell is typically made of tens of atoms for materials to thousands of atoms for proteins,” she says.

“For crystals, once you have the repeating unit cell you understand all the structure. For a glass, every atom is in a unique position – there’s no periodicity. And so the unit cell is essentially infinite.”

Her ambition is to determine if some motifs are more common than others within a glass. “And if there is any order, how far out that extends beyond nearest-neighbour atomic distances.”

One of her more ambitious goals is to see if she, with the help of her colleagues at the Centre for Electron Microscopy and the School of Physics and Astronomy, can lay the foundations for a new discipline, an equivalent to crystallography, that can be used to study disordered materials. She feels very fortunate that a new-generation electron microscope (funded under the Australian Research Council Linkage, Infrastructure, Equipment and Facilities scheme) is heading to Monash later this year, in time for her investigations.

“I don’t anticipate that the mystery of the nature of glass will be solved within my lifetime,” she says. “It’s one of those things where people lack consensus about which direction to go in. But with new instruments and methods we’ll be able to understand better the role of structure. ”