The study, published in Nature Geoscience, focused on understanding a major sea level rise during the Cambrian period, which caused large parts of North America to be flooded by a shallow sea.

Researchers aimed to determine how long this episode of continental flooding took by studying ancient sediments preserved in the Grand Canyon that were deposited at the bottom of the Cambrian sea that covered most of the southwestern United States.  Previous studies on these sediments suggested they were deposited slowly over a period of around 60 million years as the sea gradually submerged North America.

“Using high-precision dating techniques we were able to show that these ancient sediments were actually deposited very rapidly (geologically speaking) over a large region, in less than five million years,” said one of the study’s authors, Dr Jacob Mulder, a  Research Fellow at the Monash School of Earth, Atmosphere and Environment. 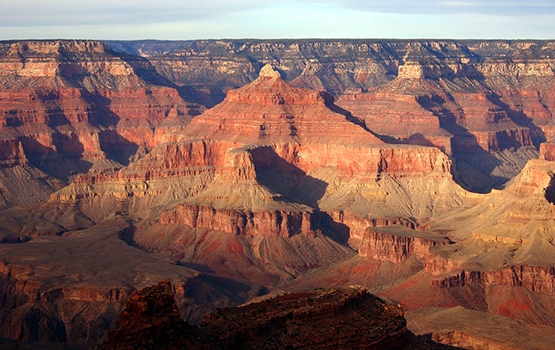 “Our results suggest that this major continental flooding event occurred much faster than previously realised,” he said.

“This study is important because it demonstrates that rapid geological events can be resolved in very old rocks, like those in the Grand Canyon, which have traditionally been difficult to precisely date.

“Our findings are globally significant because the evidence for sea level rise and continental flooding is also recorded by Cambrian-aged rocks on other continents, including Australia.”

The Cambrian period (which occurred around 500 million years ago) was a dramatic time on earth characterised by major episodes of continental rifting, large fluctuations in the chemistry of the atmosphere and ocean, sea level rise, climate change, and the evolution of complex life.

Ancient rocks formed during this time are our only record of these significant changes in the earth system.

“Understanding how fast these changes happened and how they might be linked to one another has proved difficult because it is challenging to determine the age of rocks with high enough resolution,” Dr Mulder said.

The researchers studied sedimentary rocks that made up the Sixtymile Formation and Tapeats Sandstone, which are located near the bottom of the Grand Canyon in Arizona.

“Our study paves the way for future research to test whether these episodes of continental flooding occurred at exactly the same time and as rapidly as the event recorded in the Grand Canyon,” Dr Mulder said.

“If confirmed, a rapid and major global rise in sea level will prompt scientists to reconsider how geological processes interact with other earth systems, such as the climate, to trigger these kinds of events,” he said.

“Despite being perhaps the most iconic geological feature on earth, geologists are continuing to make exciting and unexpected discoveries in the Grand Canyon. “

The study was led by the University of New Mexico, and the Denver Museum of Nature and Science.