International research co-authored by a Monash biologist has shown for the first time that bacterial viruses (bacteriophages) directly interact with the cells of the human body. 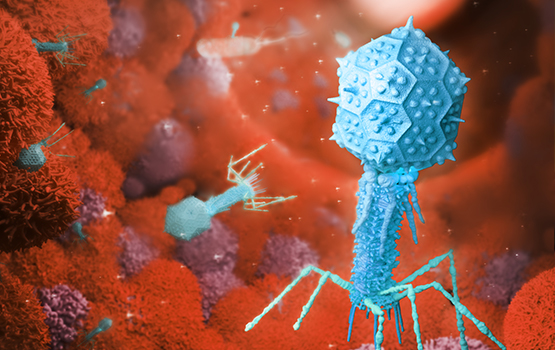 The findings published in the journal mBio show that human cells transport bacteriophages into and throughout our body.

Bacterial viruses known as ‘bacteriophages’ can penetrate the epithelial cell layers of the gut and spread throughout the sterile regions of the body. Credit: T2Q artist (Rob Cot)

Bacteriophage (or phage for short) are the most abundant and diverse microbes found in the body. Phages control and manipulate bacterial populations, prevent infection and disease and have important roles in regulating the microbiome and body that have not yet been fully elucidated.

“We have known for a long time that phages are present in the blood and organs of the body,” said the study’s senior author, Dr Jeremy Barr from the Monash School of Biological Sciences. “But no one has known exactly how these phages get into these regions of the body,” he said.

“Our work shows that human cells transport phages across the cellular barriers that line the gut, thereby allowing them access to the blood and organs of the body.”

“This is a general and prevalent mechanism and based on our results we estimate the average human body transports 30 billion phage particles from the gut into the body every day.”

The researchers found that phages were even capable of bypassing cells isolated from the brain - the blood-brain barrier forms one of the strictest biological barriers in the body, with many drugs and small molecules being incapable of bypassing this barrier.

“The fact that phages (which are foreign virus particles) are capable of freely crossing this blood-brain barrier is nothing short of remarkable,” Dr Barr said.

“What the phages are doing inside the cells, organs and systems of our bodies is a major follow-up question.”

The study suggests that phages could be manipulating the body in diverse and unexplored ways.

“Our study is significant because we show that bacterial viruses (bacteriophages) directly interact with the cells of the human body - something that had previously thought not to occur.”

The researchers used in vitro studies to demonstrate the rapid and directional travel of diverse bacteriophages across cells in the gut, lung, liver, kidney, and brain.