This prestigious scholarship was established in memory of the late Sir James McNeill, who had a long association with Monash University. The scholarship is open to domestic and international graduate research students proposing to undertake a doctorate in music, engineering, science or medicine.

A highly competitive scholarship, only one student each from the five faculties of Arts (School of Music), Engineering, Medicine, Pharmacy and Science is nominated by their respective faculty for this Award annually.

Madeleine’s thesis focuses on the evolutionary ecology of the delicate skink, which is the only invasive Australian lizard species (established on Lord Howe Island, New Zealand and Hawaii). 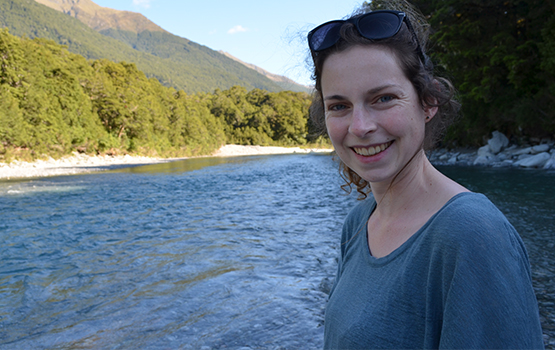 The global scientific community has raised the alarm on how introduced and invasive species in new environments are a growing and serious threat to native species around the world.

“Climate change exacerbates the issue, and in some cases it may have helped the introduction process as well as increase the vulnerability of species to an invader,” Madeleine said.

Madeleine’s honours work partly looked at how behavioural variation changes in a group of rainforest sunskinks (a closely related species) reared in a novel environment.

“I want to extend that work to the delicate skink as well as looking at variation in a range of other traits to gain more insight into the invasion process as well as into broader evolutionary concepts,” Madeleine said.

“This insight will hopefully increase our understanding of the risks that native wildlife faces.”

“Apart from the encouragement and sense of accomplishment, these scholarships will make a big difference to how much time I will be able to dedicate to research and study,” Madeleine said.

“With the extra financial assistance, I can dedicate more time to research and jump at opportunities I might not have been able to otherwise, rather than needing to work alongside my PhD.”

Madeleine will be continuing her research with her Honours supervisors Associate Professor Bob Wong and Associate Professor David Chapple from the School of Biological Sciences. She hopes to pursue a career in research either in academia, or a non-profit or government organisation.

“I have always been curious about how things work, and have found research to be very rewarding,” Madeleine said.

“I want to be able to use my skills to further our understanding of ecological and evolutionary processes in a way that informs better management and conservation of our wildlife.”