This warming pattern, commonly referred to as ‘Arctic amplification’, is consistent with computer models, simulating the response to increasing greenhouse gas concentrations.

However, until now, the underlying physical processes for the intensified warming have remained elusive.

A new international research study on the cause of Arctic amplification published today in the journal Nature Climate Change shows that local greenhouse gas concentrations, and Arctic climate feedbacks outweigh the impact of remote processes.

“This study is significant as it disproves previously suggested hypotheses of the cause of Polar Amplified warming, showing that local greenhouse gas concentrations, and Arctic climate feedbacks outweigh the impact of remote processes,” said one of the study authors Dr Shayne McGregor, a climate scientist from the Monash School of Earth, Atmosphere and Environment. 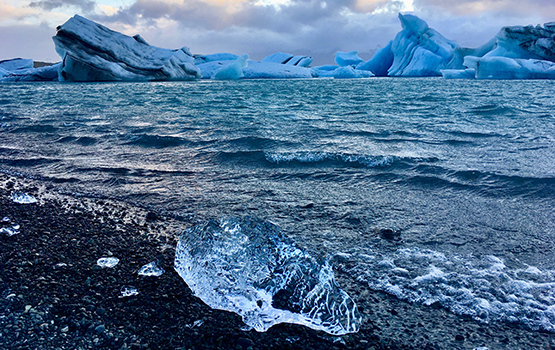 “The local greenhouse gas induced changes in the vertical atmospheric temperature profile in the Arctic region outweigh other regional feedback factors, such as the often-cited ice-albedo feedback,” he said.

Using complex computer simulations, the team of International Scientists were able to disprove previously suggested hypotheses that emphasized the role of transport of heat from the tropics to the poles as one of the key contributors to the amplified warming in the Arctic.

In the Arctic region, surface warming reduces snow and sea-ice extent, which in turn decreases the reflectivity of the surface. As a result, more sunlight can reach the top of layers of the soil and ocean, leading to accelerated warming. Furthermore, changes in Arctic clouds and of the vertical atmospheric temperature profile can enhance warming in the polar regions.

In addition to these factors, heat can be transported into the Arctic by winds.

“We see this process for instance during El Niño events,” Dr McGregor said.

“Tropical warming, caused either by El Niño or anthropogenic greenhouse emissions, can cause global shifts in atmospheric weather patterns, which may lead to changes in surface temperatures in remote regions, such as the Arctic.”

Moreover, global warming outside the Arctic region will also lead to an increase in Atlantic Ocean temperatures. Ocean currents, such as the Gulf Stream and the North Atlantic drift can then transport the warmer waters to the Arctic ocean, where they could melt sea ice and experience further amplification due to local processes.

“Our simulations demonstrate that remote physical processes from outside the polar regions do not play a major role, in contrast to previous suggestions,” Dr Stuecker said.

In the tropics – fueled by high temperature and moisture – air can easily move up to high altitudes, meaning the atmosphere is unstable. In contrast, the Arctic atmosphere is much more stable with respect to vertical air movement. This condition enhances the CO2-induced warming in the Arctic near the surface. In the tropics – due to the unstable atmosphere – CO2 mostly warms the upper atmosphere and energy is easily lost to space. This is opposite to what happens in the Arctic: Less outgoing infrared radiation escapes the atmosphere, which further amplifies the surface-trapped warming.

“Our computer simulations show that these changes in the vertical atmospheric temperature profile in the Arctic region outweigh other regional feedback factors, such as the often-cited ice-albedo feedback,” Dr Stuecker said.

The new findings of this study highlight the importance of Arctic processes in controlling the pace at which sea-ice will retreat in the Arctic Ocean. The results are also important to understand how sensitive polar ecosystems, Arctic permafrost and the Greenland ice-sheet will respond to Global Warming.