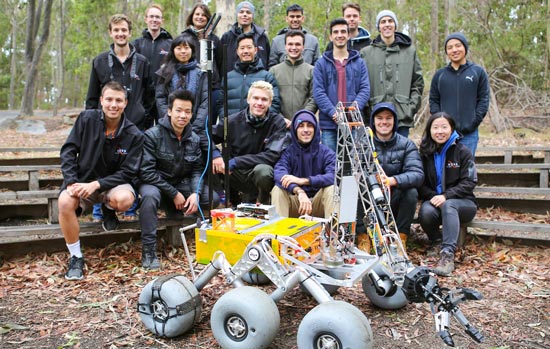 A student team from Monash University is taking one small step for Australia and one giant leap for future life on Mars as it competes against the world’s best to build the next generation of space rovers that will one day accompany human explorers to the Red Planet.

Monash’s Nova Rover team is the sole entry accepted from the southern hemisphere to test its latest space innovation at the 2019 University Rover Challenge (URC) at the Mars Desert Research Station in Hanksville, Utah, in the US, on Thursday 30 May.

After the most competitive process in URC history, the Nova Rover team won its place among 36 teams from 10 countries with its improved rover design.

The annual competition challenges university students from around the world to build a space rover for just US$18,000 (A$25,600) that can perform the same tasks as a multibillion-dollar Mars rover. The winning team will present at the International Mars Society Convention at the University of Southern California in October.

About 20 Monash engineering and science students will make the 14,000km journey to the epicentre of Mars research with a revolutionary chassis design, previously unseen in literature and space projects, and a strong belief of outperforming other universities.

And they venture forth with an arsenal of new gizmos and gadgets that will hopefully build on the team’s respectable 14th place from 96 teams in last year’s competition.

Features of the new rover include:

“These rovers can scope areas of future interest and teach us more about the planet and its dangers before we set foot there.

“We also hope that this challenge contributes to a great passion for the study of science, engineering and technology, and boosts support for the creation of new technology and ideas that could deliver incredible breakthroughs and shape the future of humanity.”

Over three days of competition, the team will complete tasks in extreme retrieval and delivery, equipment servicing, autonomous traversal and science – all tasks a real Mars rover will need to undertake in support of human exploration.

Dr Chao Chen, Senior Lecturer in the Department of Mechanical and Aerospace Engineering, and Nova Rover supervisor, said the team was evidence of innovation, exploration and inspiration at a grassroots level, and congratulated the students on their outstanding achievements. He’s supported in his role by Dr Jasmina Lazendic-Galloway from the School of Physics and Astronomy.

“The Nova Rover team is passionate and energetic, with each student spending weekdays and weekends in the workshop, and conducting field research to develop, test and refine the system,” Dr Chen said.

“Some alumni of the Nova Rover team have since found positions at Gilmour Space and interned at NASA. The opportunities for our students are endless.”

Dean of the Faculty of Engineering, Professor Elizabeth Croft, said the Nova Rover student team members are already developing the type of technical and entrepreneurial skills needed to drive innovation in Australia’s growing space industry, which is estimated to triple in worth to $12 billion and create up to 20,000 jobs by 2030.

“We need many more engineers like these ones to build a strong and competitive Australian space industry. They have technical knowledge and creative design skills to take these projects from idea to reality,” she said.

“Our students are already demonstrating their capability to drive space industry innovation at an international level, and offer a wonderful example of how Monash is preparing Australia’s next-generation engineers to deliver creative technical solutions to the world’s most exciting challenges.”

To watch the promotional video about the Nova Rover team and their Mars rover, please visit https://www.youtube.com/watch?v=1iWWmPoYnnA.