A world-first international study led by a Monash scientist has found that six streams in Melbourne’s eastern suburbs contain a cocktail of pharmaceuticals, which may put platypuses and other aquatic animals at risk as they could consume more than 60 pharmaceuticals compounds, including antidepressants, at disturbing levels.

Many pharmaceuticals enter streams via wastewater treatment facilities, which are not designed to remove all the compounds we consume, or via septic tanks and leaky pipes. The research team tested for 98 different pharmaceutical compounds – whereas previous studies have only examined a handful of these. The study found that larval invertebrates living in the stream can accumulate pharmaceuticals and that their predators, platypuses and brown trout, could theoretically be consuming the pharmaceuticals at up to half the daily dosage for humans. 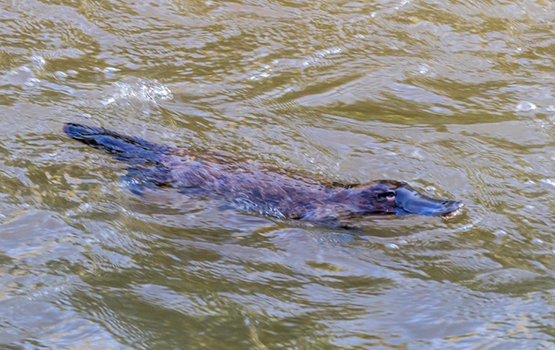 Lead study author Dr Erinn Richmond, a Monash Postdoctoral Research Fellow in the School of Chemistry, said the study, published in Nature Communications today, was the first to show that a diverse array of pharmaceutical compounds exist in food webs which could be transferred to spiders, and other organisms that feed on aquatic invertebrates.

“The concentrations of drugs in stream invertebrates that we have found suggest that animals such as platypuses that eat these invertebrates may be exposed to antidepressants, for example, in doses that are up to half those of human therapeutic doses,” Dr Richmond said.

“Our research is significant because we confirm that many pharmaceuticals are accumulating in aquatic invertebrates, but are also leaving the stream and moving to the surrounding landscape where they are consumed by spiders and potentially birds and bats for example,” she said.

The researchers collected invertebrates and riparian spiders that feed predominantly on emerged aquatic insects, from six streams around Melbourne, some with very little wastewater, two receiving some leachate from septic tanks two just downstream of a wastewater treatment plant.

They analysed invertebrate tissues for 98 pharmaceutical compounds, and were then able to estimate the extent of exposure, relative to a human therapeutic dose, of stream animals, for example, brown trout and platypuses, whose prime food source is aquatic insects.

“The drugs we take have a targeted physiological response in humans – that’s why we take them,” said study co-author, Associate Professor Michael Grace, Director of the Water Studies Centre at the Monash School of Chemistry.

“But what we have shown is that a wide variety of these same drugs are also being taken up by invertebrates in streams and then moving up the food web and out of the waterway when these insects emerge,” he said.

“It is now important to find out what effects the pharmaceuticals we take are having on these non-target organisms.”