It is a profoundly emotional experience for him.

Monash Chemistry Professor San Hoa Thang arrived in Australia as a refugee in 1979 – Australia, he says – was the first country to accept him.

Today (11 June, 2018) he is being recognised for his achievements in chemistry in the Queen’s Birthday Honours with the award of Companion of the Order of Australia.

“I am so immensely grateful to be receiving this award,” said Professor Thang, “as Australia was the first country to accept me as a refugee.”

Professor Thang was born in Saigon, Vietnam on 28 August 1954.

He completed his BSc in Chemistry (University of Saigon, Faculty of Science, Vietnam) in 1976. 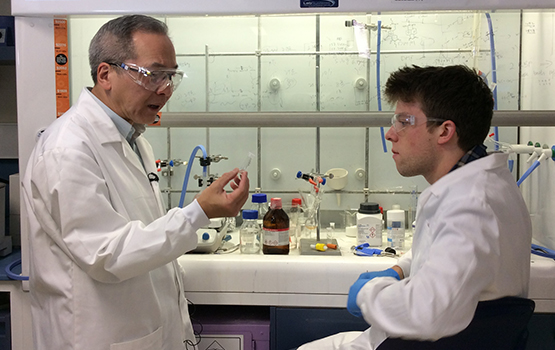 Professor San Hoa Thang with one of his students.

He left Vietnam on a flimsy shipping boat that crossed the South China Sea to Malaysia where he stayed in a refugee camp before coming to Australia.

“It was a terrifying experience,” he says, adding that he often wonders how he managed to survive it.

His research focus is on the interface between organic and polymer chemistry.

“Australia has opened so many doors for me and has allowed me to pursue my passion and love of science,” said Professor Thang.

“Sometimes I look back and find it all a little difficult to believe,” he said.

“It is very emotional for me because it reminds me of the sacrifices and challenges I faced."

“But there were also many kind and generous people I met and many precious opportunities came my way to help with a career I once thought might no longer have been possible.”

“I am very grateful for what I have been able to achieve in Australia and I want to inspire people.”