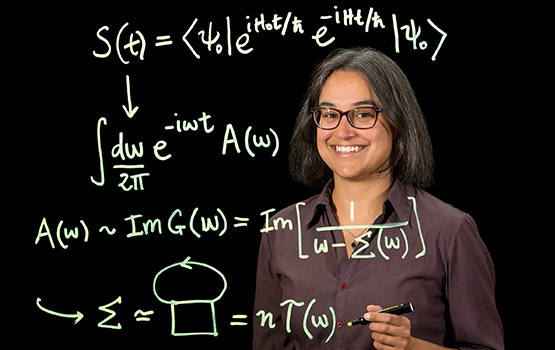 Monash Physicist Associate Professor Meera Parish has been named 2019 Outstanding Referee, the only one in Australia, by the influential American Physical Society (APS).

Associate Professor Parish is a theoretical physicist whose focus is on understanding and mathematically describing the behaviour of many interacting quantum particles such as atoms and electrons.

Her work expands our knowledge of quantum physics and has the potential to underpin a new generation of electronic devices in the future.

Each year the APS Outstanding Referee program recognises approximately 150 of the currently active referees for their invaluable work.

The selection this year was made from 30 years of records on over 71,000 referees who have been called upon to review manuscripts, including more then 40,000 that were submitted in 2018.

The 2019 honorees come from 29 different countries, with large contingents from the U.S., Germany, U.K., Canada, and France.

The APS, which has over 55,000 members worldwide is a nonprofit membership organisation working to advance the knowledge of physics through its research journals, scientific meetings, and education, outreach, advocacy, and international activities.