An international study involving a Monash biologist has outlined a much-needed framework to significantly improve the monitoring of status and trends of species worldwide. This finding comes after a multi-year collaboration under the auspices of the Group on Earth Observations Biodiversity Observation Network (GEO BON). 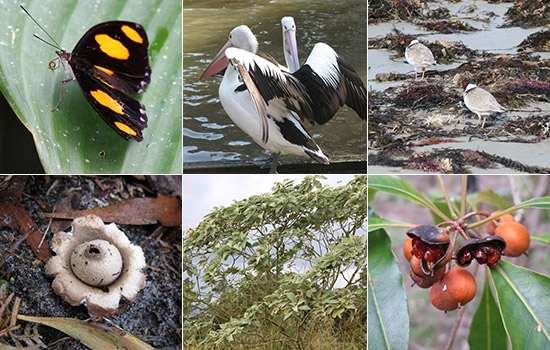 The study is published in Nature Ecology & Evolution.

Data to assess distributions and trends varies vastly among species. Many tropical butterflies may only have a few records, while some bird species in Australia may be documented with thousands of records. Rare bird species in Australia are well documented, whereas fungi are not. Problem species, including native invaders, need many records so that their invasion can be tracked. Top left image credit: W. Jetz, other credits: M. McGeoch.

Changes to biodiversity are already happening with severe potential consequences to all species, including humans, the researchers say.

The loss or invasion of a single species can dramatically alter the function of an entire ecosystem, explained Walter Jetz, lead author and Yale professor of ecology and evolutionary biology and of forestry and environmental studies.

Yet, current information about how and where species populations are changing on the planet remains “woefully inadequate,” according to study co-author Professor Melodie McGeoch of Monash University, Australia.

"It lags far behind scientists’ monitoring of other aspects of environmental change," she said.

Following in the footsteps of a similar approach in climate science to characterize core information, the researchers first identified “essential variables” for addressing species populations. These are standardized measures that with the aid of other information — such as that gathered by satellite-based remote sensing — and models integrate the often gap-ridden raw species data to give a clear picture of the distribution and abundance of species. The experts then laid out recommended practices that support this framework, such as better data sharing across national borders and enhanced collaboration between the varied parties involved in relevant data collection, from amateurs to government agencies.

"We are on the brink of a new age of sustainable knowledge delivery for life on our planet. As we show here, rapid developments in biodiversity data science and modelling will deliver benefits for decision makers via these essential variables for species populations,” said Professor McGeoch.

“We hope that the presented concept and framework for global species monitoring will lay an important foundation for the collection and use of biodiversity data in support of conservation and resource management worldwide. Any agencies, businesses, conservation organizations, or international bodies concerned with the management of our lands and oceans would benefit from more reliable and representative information about the status and trends of species,” said Professor Jetz.

The study’s suggestions also have the potential to help researchers themselves, he said. Improved global species monitoring would help close knowledge gaps that hinder present research that requires spatial biodiversity information, especially information about parts of the world and the tree of life that are hard to document through current practices.

The study was developed with support from GEO BON and the German Centre for Integrative Biodiversity Research, iDiv. Additional funding was provided by grants from the National Science Foundation and the National Aeronautics and Space Administration.