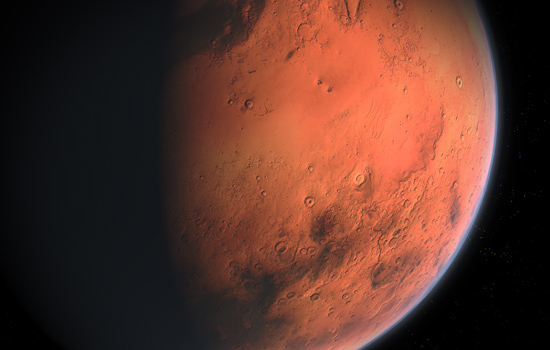 Mars is a barren and inhospitable place, however, scientists think there is a chance that simple lifeforms such as microbes may still exist on the planet. But if they are out there – what are they eating?

New research led by Monash scientist Dr Andy Tomkins, and published in the Journal of Geophysical Research may provide the answer to what may be the menu of choice for Martian bugs.

The research, which involved other scientists from Monash, Imperial College London, University of Stirling and University of Alberta, reveals that cosmic dust is a likely source of nutrients to the Martian surface.

Today the surface of Mars is an inhospitable place, with temperatures far below freezing, a surface dosed with dangerous levels of radiation, and a super thin atmosphere. But water exists as ice in some places, and there is clear evidence that water was present on the surface in the past, suggesting that Mars may have been, and possibly still is, habitable for life. Compared to Earth, however, the rocky surface is rather barren.

On Earth nutrients are common-place, these include molecules made from C, N, O and P that make up the bulk of what organisms are made of, including us, but just as importantly, trace amounts of metals such as nickel that are essential parts of our metabolisms.

Dr Tomkins said that all of these key elements are found in cosmic dust, which falls on Mars all the time as micrometeorites.

“Our calculations of atmospheric entry suggests that micrometeorites survive on the Martian surface much better than on Earth,” Dr Tomkins said.

“These dust particles contain abundant Fe, Ni, S and probably P, all of which can provide nutrients.

The geology of Mars is important too.

“The surface of Mars is very old”, said Dr Tomkins.

“Some areas are millions of years old, and the infalling cosmic dust builds up over time.”

The weather on the red planet may also mean that some places are better than others for nutrients and life.

Cosmic dust is moved around by the wind, and dense particles like metal are concentrated in cracks in the surface.

The researchers found similar cosmic dust in the Nullarbor desert in Australia that had been concentrated by the wind.

“Some places on Mars may be a smorgasbord for Martian bugs,” Dr Tomkins said.

Whether there are large amounts of cosmic dust on Mars is yet to be confirmed, but Dr Tomkins thinks they have already been seen.

“Curiosity has found areas where larger rocks and high-density sand grains accumulate on Mars, these are predicted to be rich in cosmic dust, and thus the essential nutrients for life. These would be great places to look for evidence of life.” he said.

In a separate but related paper, led by Imperial College London and involving Dr Tomkins, the team found that organic-rich cosmic dust on Mars was 10 times more likely to survive atmospheric entry than on Earth.

“Organic molecules are expected to be everywhere on the martian surface,” said lead author Aaron Wilson, a PhD student at Imperial College London.

The papers can be found at: