What gravitational waves can teach us about the universe

Two collapsed stars collide in a galaxy 130 million light years away. The explosion caused a wobble in space-time called a gravitational wave that travelled across the universe, and was recorded by three supersensitive gravitational-wave observatories on Earth.

Gravitational waves have been detected before, but earlier detections involved colliding black holes – an invisible event. The neutron star merger was the biggest fireworks show humans have ever seen, and was monitored by astronomers, astrophysicists and cosmologists around the world. Dr Paul Lasky, a lecturer at the Monash University's school of physics and astronomy, was one of them.

He explains why he has barely slept since the gravitational wave sensors recorded their explosive 100-second event on August 17.

View the video explaining the discovery.

What was so exciting about the neutron star merger?

Neutron star mergers are the biggest collisions in the Universe. Out best estimate is that a little bit more than a full mass of the Earth equivalent of gold was created at that time. Heavy elements like gold are hard to create in any other environment. It is very cool. An enormous amount of science is coming out of this.

You have a particular interest in neutron star mergers.

I co-led a paper which is coming out now, that looks at what happens to neutron stars post-merger. We couldn’t see anything, which is not altogether unsurprising given how far away this event was, but it is still very exciting. 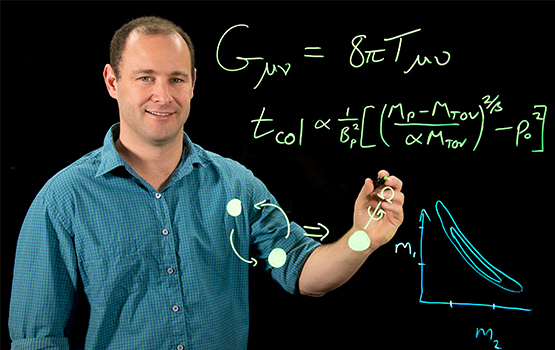 There are two possibilities. Either it immediately formed a black hole, which I don’t think is very likely. Or it could have formed what we have called a hyper-massive neutron star. And this would be about two times the mass of our sun, it would last for approximately a few hundred milliseconds before collapsing to a black hole.

That’s what I think happened.

A mysterious gamma ray burst was emitted 1.7 seconds after the gravitational wave detection. I think this hyper-massive neutron star survived the collision. It lasted for a few hundred milliseconds, and during that time a huge magnetic field got wound up and launched this big jet, and that jet was the Gamma-ray burst. And then the neutron star collapsed to form a black hole.

What can gravitational waves teach us about the universe?

With gravitational waves we have the potential to probe all the way to the Big Bang, and to the first second after the Big Bang – a remarkable step back through time.

At the moment, when we look through our telescopes at the early universe, there is an impenetrable wall that you can’t get past, and it’s called the cosmic microwave background. This is 300,000 years after the Big Bang. That’s as far back as we can go using traditional astronomy techniques. Any light that was emitted before that, also got absorbed before that, so it can’t come out and reach our telescopes. But about 300,000 years ago the universe became transparent to these light waves, so they could come out and travel 15 billion light years before they reach our telescopes.

Did you have an emotional stake in gravitational waves finally being found?

(Gravitational waves were predicted by Einstein. Dr Lasky did his honours thesis on Einstein's General Theory of Relativity.)

I really did. I am in absolute awe of anything that Einstein did. Even as a teenager I was reading about him – popular science accounts. So absolutely I had this emotional stake in there, ‘it has to be right, it has to be true, these gravitational waves ought to exist’.

It’s the elegance of the theory. But also general relativity has now passed so many tests. Gravitational waves were one of the last ones . When you study the theory and the mathematics and all the rest of it, the gravitational waves just have to be there.

You say gravitational waves will help us look further into the universe, but how can they do that when the waves are so difficult to detect?

The signals are absolutely miniscule (the four-kilometre long Laser Interferometer Gravity Observatory – LIGO – detectors can capture a shift in space that is 1/10,000 the size of a proton). And if you only had a single detector, you would find it difficult to be confident that you had detected a gravitational wave from a colliding neutron star, say, or from some other cause. But the fact that you have two separated by thousands of kilometres means that you can identify the gravitational waves if the same signal appears in all of these detectors at the same time. There are three at the moment, two LIGOs and the new Virgo detector in Italy. One is being built in India and one in Japan. The more LIGOs you have, the more sensitive you are.

What will gravitational waves find next?

I was at a conference last week, and at the conference dinner we started having bets about that. I think we are going to see the merger of a black hole and a neutron star. It will be similar in some respects to the neutron-star-neutron star merger, but with the neutron-star-black hole merger we will be able to discover even more things that astrophysicists care about. How many black holes are there in the universe compared to neutron stars? How systems like that form through stellar evolution, and what it tells us about the way stars behave when they die.

Can gravitational waves help us discover what dark energy is? And how does this relate to Einstein?

(In the late 1990s astrophysicists Brian Schmidt and Saul Perlmutter independently calculated that the Universe was expanding at a faster rate than had previously been believed. The unidentified force behind this expansion has been called ‘dark energy’ and is responsible for 73 per cent of the universe.)

Einstein realised fairly early on with his descriptions of general relativity, of how gravity works, that if you have a universe described by his theory, it shouldn’t be stable. It should actually collapse back on itself. We shouldn’t all exist. Upon realising that he immediately said ‘oh, OK this is not right’. So he added another term into his equation to fix this problem. The symbol is lambda [the 11th letter in the Greek alphabet] and it is known as the cosmological constant. Einstein famously called this his biggest blunder. It wasn’t until many, many years later that people realised that this lambda thing might exist and that we might need it to understand our cosmological observations. It is what Brian Schmidt earned the Nobel Prize for. So it went full circle, Einstein put it in, then he said it shouldn’t exist, and now it’s the biggest mystery.

Paul Lasky is a member of the LIGO Scientific Collaboration. Monash colleagues who participated with him in the LIGO collaboration are: Dr Eric Thrane, Dr Duncan Galloway, Dr Kendall Ackley and Dr Letizia Sammut.

Features and Opinion Physics and Astronomy