International research driven by a Monash biologist has culminated in a ground-breaking method using ‘green lasers’ to examine the most intricate parts of plant leaves.

The research team used green lasers and a special kind of light scattering, called Raman Spectroscopy, to study the distribution of cyanide-releasing chemicals in the tissues of plant leaves – an approach believed to be a world-first.

Many plants make toxic cyanide with potentially disastrous consequences for consumers of these crops in the absence of complex processing, such as cassava where high cyanide is known to cause paralysis and death, with children particularly at risk. 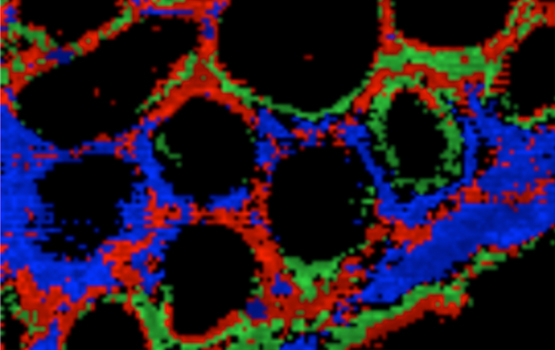 Cluster map showing the regions of the cyanide-releasing chemicals in the tips of germinating Sorghum. Red is where concentrations are high, followed by green and then lowest concentrations by blue.

“But until now it has not been known where plants store them to make sure they do not poison themselves,” said study co-author and project lead Professor Ros Gleadow, who heads the Plant Ecophysiology Group at the Monash School of Biological Sciences.

Professor Gleadow suspected that the chemicals were stored in subcellular, membrane bound compartments but basically it was a complete unknown.

She enlisted the help of fellow Monash researcher Dr Philip Heraud who is the Co-Director of the Monash Centre for Biospectroscopy and an expert in biospectroscopy and asked him to work with her to develop a method where the location of the chemicals could be examined without a lot of messing around with leaf structure.

“Leaf composition in the past has typically been analysed by homogenizing whole leaves, or parts of leaves,” Professor Gleadow said.

“This removes the ability to distinguish between relative changes in composition of the different cell types present and it relies on the assumption that the leaves are uniform in the distribution of chemicals across the leaf blade. It also completely removes the ability to examine localisation at the subcellular level, something that must be important in these types of plants or they would just kill themselves”

New methods for tissue fingerprinting are being developed based on infrared microspectroscopy or mass spectrometry based bioimaging. But while they are powerful, these methods rely on fixing and preserving the plant materials. They are also hopeless for detecting cyanide.

“Raman microspectroscopy is a new technique that offers chemical information on the constituents present at high spatial resolution with microscopic samples analysed directly in situ without the need for fixing and prior chemical treatments,” Professor Gleadow said.

“We made some surprising discoveries,” said Professor Gleadow “radically, it may be that these compounds are contained in a new class of non-membrane bound compartments. It’s really exciting stuff.”

The full paper, published in Scientific Reports, can be read here. The research originated from an undergraduate honours project by Max Cowan, the second author of the paper.